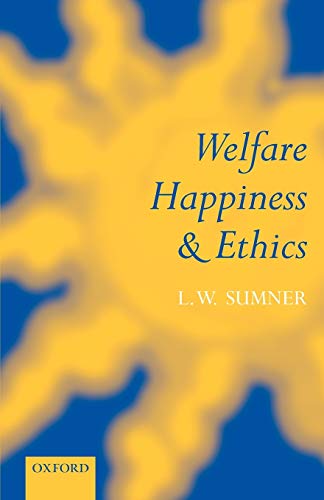 Moral philosophers agree that welfare matters. But they do not agree about what it is, or how much it matters. Wayne Sumner presents an original theory of welfare, investigating its nature and discussing its importance. He considers and rejects all notable rival theories of welfare, bothobjective and subjective, including hedonism and theories founded on desire or preference. His own theory connects welfare closely with happiness or life satisfaction.Professor Sumner then proceeds to defend welfarism, that is, to argue (against the value pluralism that currently dominates moral philosophy) that welfare is the only basic ethical value, the only thing which we have a moral reason to promote for its own sake. He concludes by discussing theimplications of this thesis for ethical and political theory.… (more)

Goodness and Advice by Judith Jarvis Thomson
Natural Rights Theories: Their Origin and Development by Richard Tuck
Humanity: A Moral History of the Twentieth Century by Jonathan Glover