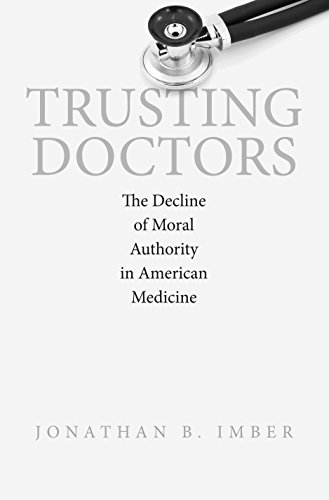 Trusting Doctors: The Decline of Moral Authority in American Medicine

by Jonathan B. Imber

For more than a century, the American medical profession insisted that doctors be rigorously trained in medical science and dedicated to professional ethics. Patients revered their doctors as representatives of a sacred vocation. Do we still trust doctors with the same conviction? In Trusting Doctors, Jonathan Imber attributes the development of patients' faith in doctors to the inspiration and influence of Protestant and Catholic clergymen during the nineteenth and early twentieth centuries. He explains that as the influence of clergymen waned, and as reliance on medical technology increased, patients' trust in doctors steadily declined. Trusting Doctors discusses the emphasis that Protestant clergymen placed on the physician's vocation; the focus that Catholic moralists put on specific dilemmas faced in daily medical practice; and the loss of unchallenged authority experienced by doctors after World War II, when practitioners became valued for their technical competence rather than their personal integrity. Imber shows how the clergy gradually lost their impact in defining the physician's moral character, and how vocal critics of medicine contributed to a decline in patient confidence. The author argues that as modern medicine becomes defined by specialization, rapid medical advance, profit-driven industry, and ever more anxious patients, the future for a renewed trust in doctors will be confronted by even greater challenges. Trusting Doctors provides valuable insights into the religious underpinnings of the doctor-patient relationship and raises critical questions about the ultimate place of the medical profession in American life and culture.… (more)