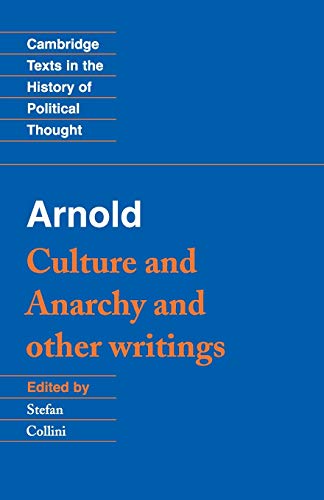 Arnold: 'Culture and Anarchy' and Other Writings

Philosophy, Liberal Education and the University

Matthew Arnold's Culture and Anarchy (1869) is one of the most celebrated works of social criticism ever written. It has become an inescapable reference-point for all subsequent discussion of the relations between politics and culture, and it has exercised a profound influence both on conceptions of the distinctive nature of British society, and on ideas about education and the teaching of literature more generally. This edition establishes the authoritative text of this much-revised work, and places it alongside Arnold's three most important essays on political subjects - Democracy, Equality, and The Function of Criticism at the Present Time. The editor's substantial introduction situates these works in the context both of Arnold's life and other writings, and of nineteenth-century intellectual and political history. This edition also contains a chronology of Arnold's life, a bibliographical guide and full notes on the names, books, and historical events mentioned in the texts.… (more)

Rationalism in Politics and Other Essays by Michael Oakeshott