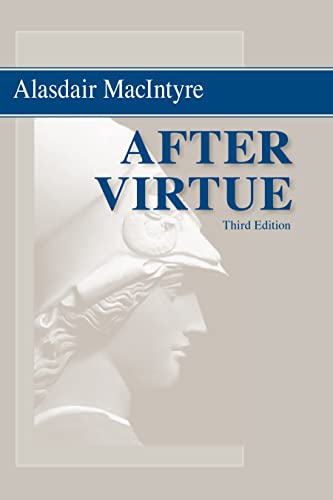 After Virtue: A Study in Moral Theory, Third Edition

Highly controversial when it was first published in 1981, Alasdair MacIntyre's After Virtue has since established itself as a landmark work in contemporary moral philosophy. In this book, MacIntyre sought to address a crisis in moral language that he traced back to a European Enlightenment that had made the formulation of moral principles increasingly difficult. In the search for a way out of this impasse, MacIntyre returns to an earlier strand of ethical thinking, that of Aristotle, who emphasised the importance of 'virtue' to the ethical life. More than thirty years after its original publication, After Virtue remains a work that is impossible to ignore for anyone interested in our understanding of ethics and morality today.

Christianity Today's Books of the Century

Short History of Ethics by Alasdair C. MacIntyre
Nicomachean Ethics by Aristotle
A Theory of Justice by John Rawls
Contingency, Irony, and Solidarity by Richard Rorty
Personal Knowledge: Towards a Post-Critical Philosophy by Michael Polanyi
1 more
The Future for Philosophy by Brian Leiter
Fewer