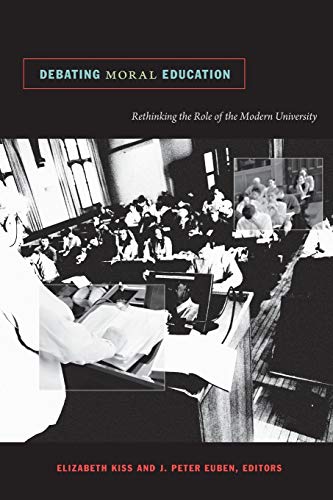 Debating Moral Education: Rethinking the Role of the Modern University

After decades of marginalization in the secularized twentieth-century academy, moral education has enjoyed a recent resurgence in American higher education, with the establishment of more than 100 ethics centers and programs on campuses across the country. Yet the idea that the university has a civic responsibility to teach its undergraduate students ethics and morality has been met with skepticism, suspicion, and even outright rejection from both inside and outside the academy. In this collection, renowned scholars of philosophy, politics, and religion debate the role of ethics in the university, investigating whether universities should proactively cultivate morality and ethics, what teaching ethics entails, and what moral education should accomplish. The essays quickly open up to broader questions regarding the very purpose of a university education in modern society. Editors Elizabeth Kiss and J. Peter Euben survey the history of ethics in higher education, then engage with provocative recent writings by Stanley Fish in which he argues that universities should not be involved in moral education. Stanley Hauerwas responds, offering a theological perspective on the university's purpose. Contributors look at the place of politics in moral education; suggest that increasingly diverse, multicultural student bodies are resources for the teaching of ethics; and show how the debate over civic education in public grade-schools provides valuable lessons for higher education. Others reflect on the virtues and character traits that a moral education should foster in students--such as honesty, tolerance, and integrity--and the ways that ethical training formally and informally happens on campuses today, from the classroom to the basketball court. Debating Moral Education is a critical contribution to the ongoing discussion of the role and evolution of ethics education in the modern liberal arts university. Contributors. Lawrence Blum, Romand Coles, J. Peter Euben, Stanley Fish, Michael Allen Gillespie, Ruth W. Grant, Stanley Hauerwas, David A. Hoekema, Elizabeth Kiss, Patchen Markell, Susan Jane McWilliams, Wilson Carey McWilliams, J. Donald Moon, James Bernard Murphy, Noah Pickus, Julie A. Reuben, George Shulman, Elizabeth V. Spelman… (more)

The Idea of the University: A Reexamination by Professor Jaroslav Pelikan
Universities in the Marketplace: The Commercialization of Higher Education by Derek Bok
Excellence Without a Soul: How a Great University Forgot Education by Harry Lewis
College: What it Was, Is, and Should Be by Andrew Delbanco
The Marketplace of Ideas: Reform and Resistance in the American University by Louis Menand
8 more
The Decline of the Secular University by C. John Sommerville
Education's End: Why Our Colleges and Universities Have Given Up on the Meaning of Life by Anthony T. Kronman
Not For Profit: Why Democracy Needs the Humanities by Martha C. Nussbaum
The Idea of A University by John Henry Cardinal Newman
The Chosen: The Hidden History of Admission and Exclusion at Harvard, Yale, and Princeton by Jerome Karabel
The Work of the University by Richard C. Levin
The Rise of Universities by Charles Homer Haskins
The Honor Code: How Moral Revolutions Happen by Kwame Anthony Appiah
Fewer