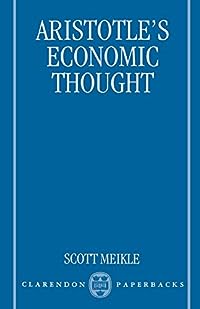 Since the middle ages, Aristotle has been hailed as the father of economics by economists, while classical scholars hold that he did no economics at all, only ethics. This book argues that Aristotle does develop a coherent theory of value, wealth, exchange, and money, which is strongly supported by his metaphysics. But its very metaphysical foundation make the theory impossible to assimilate to Neo-Classical economics or any other kind of economic thinking, and it therefore remains an ethical theory. On Aristotelian metaphysical principles, ethics and economics are competitors over the same ground--as rival sources of reasons for decision-making in tihe public realm, and they cannot be reconciled.

Index to the Works of Adam Smith (Glasgow Edition of the Works and Correspondence of Adam Smith) by Adam Smith
The Politics by Aristotle
The Moral Economy of Labor: Aristotelian Themes in Economic Theory by James Bernard Murphy
Commerce, Culture, and Liberty: Readings on Capitalism Before Adam Smith by Henry C. Clark
Aristotelian Philosophy: Ethics and Politics from Aristotle to MacIntyre by Kelvin Knight