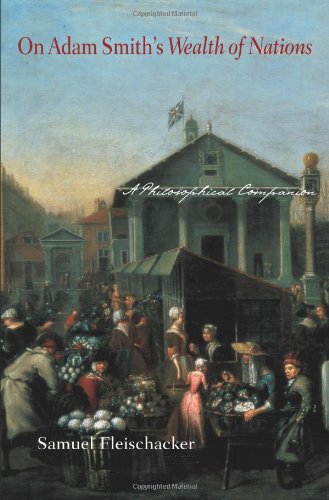 On Adam Smith's "Wealth of Nations": A Philosophical Companion

Adam Smith was a philosopher before he ever wrote about economics, yet until now there has never been a philosophical commentary on the Wealth of Nations. Samuel Fleischacker suggests that Smith's vastly influential treatise on economics can be better understood if placed in the light of his epistemology, philosophy of science, and moral theory. He lays out the relevance of these aspects of Smith's thought to specific themes in the Wealth of Nations, arguing, among other things, that Smith regards social science as an extension of common sense rather than as a discipline to be approached mathematically, that he has moral as well as pragmatic reasons for approving of capitalism, and that he has an unusually strong belief in human equality that leads him to anticipate, if not quite endorse, the modern doctrine of distributive justice. Fleischacker also places Smith's views in relation to the work of his contemporaries, especially his teacher Francis Hutcheson and friend David Hume, and draws out consequences of Smith's thought for present-day political and philosophical debates. The Companion is divided into five general sections, which can be read independently of one another. It contains an index that points to commentary on specific passages in Wealth of Nations. Written in an approachable style befitting Smith's own clear yet finely honed rhetoric, it is intended for professional philosophers and political economists as well as those coming to Smith for the first time.… (more)