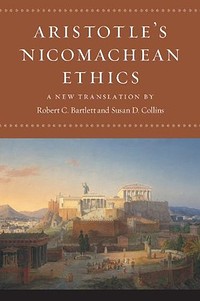 This new edition of Aristotle's Nicomachean Ethics is an accurate, readable and accessible translation of one of the world's greatest ethical works. Based on lectures Aristotle gave in Athens in the fourth century BCE, Nicomachean Ethics is one of the most significant works in moral philosophy, and has profoundly influenced the whole course of subsequent philosophical endeavour. It offers seminal, practically oriented discussions of many central ethical issues, including the role of luck in human well-being, moral education, responsibility, courage, justice, moral weakness, friendship and pleasure, with an emphasis on the exercise of virtue as the key to human happiness. This second edition offers an updated editor's introduction and suggestions for further reading, and incorporates the line numbers as well as the page numbers of the Greek text. With its emphasis on accuracy and readability, it will enable readers without Greek to come as close as possible to Aristotle's work.… (more)

The Politics by Aristotle
Republic by Plato
Aristotle: The Desire to Understand by Jonathan Lear
Plato Symposium by Plato
After Virtue: A Study in Moral Theory, Third Edition by Alasdair MacIntyre
8 more
Hobbes: Leviathan: Revised student edition (Cambridge Texts in the History of Political Thought) by Thomas Hobbes
Gorgias by Plato
The Consolation of Philosophy by Ancius Boethius
Plato: Complete Works by Plato
Aristotle: The Politics and the Constitution of Athens by Aristotle
A Treatise of Human Nature by David Hume
Meditations: A New Translation by Marcus Aurelius
A Theory of Justice by John Rawls
Fewer