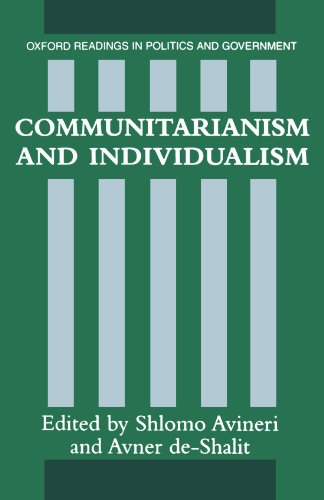 Communitarianism and Individualism (Oxford Readings in Politics and Government)

In the last decade much contemporary political and moral thought has been devoted to the debate between communitarianism and individualism. While individualists advocate the notions of rights, neutrality, and impartiality, and see society as a voluntary association for mutual advantage,communitarians argue that individuals are never detached from their society, culture, and history and that if they are to be properly understood they must first be examined in these contexts. Moreover communitarians claim that individualism makes it impossible to achieve a genuine community whichcan offer its members a just distribution of goods and morally meaningful life. The essays collected in this volume reflect the many facets of this debate and examine its implications for the political arena. They cover a wide spectrum of thought and opinion and include work by Ronald Dworkin, Marilyn Friedman, David Gauthier, Amy Gutmann, Will Kymlicka, Alasdair MacIntyre,David Miller, Robert Nozick, John Rawls, Michael Sandel, Charles Taylor, and Michael Walzer.… (more)

Kant and Political Philosophy: The Contemporary Legacy by Professor Ronald Beiner
Rationalism in Politics and Other Essays by Michael Oakeshott