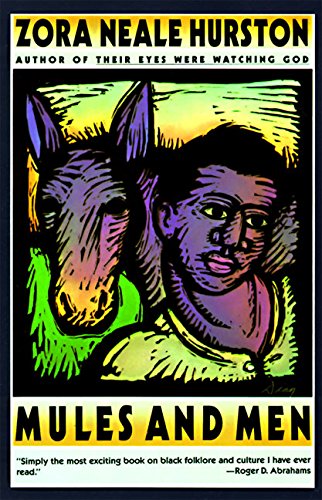 Abrahams Mules and Men is the first great collection of black America's folk world. In the 1930's, Zora Neale Hurston returned to her "native village" of Eatonville, Florida to record the oral histories, sermons and songs, dating back to the time of slavery, which she remembered hearing as a child. In her quest, she found herself and her history throughout these highly metaphorical folk-tales, "big old lies," and the lyrical language of song. With this collection, Zora Neale Hurston has come to reveal'and preserve'a beautiful and important part of American culture. Zora Neale Hurston (1901-1960) was a novelist, folklorist, anthropologist and playwright whose fictional and factual accounts of black heritage are unparalleled. She is also the author of Tell My Horse, Their Eyes Were Watching God, Dust Tracks on a Road, and Mule Bone. Ruby Dee, a member of the Theatre Hall of Fame, starred on Broadway in the original productions of A Raisin in the Sun and Purlie Victorious, and was featured in Spike Lee's Do the Right Thing. She is also an award-winning author and the producer of numerous television dramas.… (more)

LibraryThing member lilithdorsey
Zora Neale Hurston was the first african-american anthropologist. She dedicated most of her professional life to documenting and classify the culture of african-americans in the southern us and the caribbean. This book tells of her journey in this secretive world of voodoo and hoodoo practices. It provides a valuable first-person account of the practices and folklore as she discovered them.… (more)
2 more
LibraryThing member antiquary
Extremely lively participant-observer account of the author socializing with folk in her home time and incidentally sharing stories from the African-American tradition
LibraryThing member kirstiecat
I need to go back and re-read Their Eyes Were Watching God. It has been quite a few years since I read that and I remember the feelings I felt while reading better than actual details. In any case, this is a bit of a different novel-it's closer to nonfiction with a focal point being the lies or tall tales of the African communities from Florida to New Orleans in the 1930s. Zora was a bit of an outsider even though she was born in the South and was an African American woman because she was educated more than many of those she spoke to, who had greater experiences in hard labor, and she was being funded for her research which afforded her better clothing and resources than perhaps many she met along the way. She actually becomes quite aware of this at one point, scolding herself for wearing a much nicer dress to a dance than anyone in attendance. At first, one can tell the communities are cautious of her and suspicious. They also think that because she's rich she won't fit in to their circle.

But Zora seems to have a huge mission to capture the folk tales and tall tales that these men (mostly men) have to offer as they try their best to outdo one another in their lying contests. They explain everything Biblical to animal and tell stories of how the slave in past times outsmarted his master. They explain relationships between man and woman, man and the devil, man and God, and the way the world is to them. It's sometimes fascinating, and at other times quite amusing to hear how the woodpecker got his funny head, for instance. The men are creative and entertaining and Zora sucks it all in to try to document it. It's important to document the community at this time and how they pass down these stories amongst themselves. It's almost like just as an important past time as a dance or African gambling games to get them through their days and they relish in being able to tell the stories. There is also quite a bit about songs that were popularly sung. Though the men seem rather sexist, their personalities are depicted very vividly and, perhaps because Zora uses their dialect in print and writes out words as they would have said them, they are easy to picture with characters almost too big for the page.

What really threw me off reading this book was actually the hoodoo accounts of ways in which Zora joined and became a part of this community to learn about the ways of black magic in killing someone, banishing someone from your house, making someone go through extreme pain, making someone love you more, and making a whole court case go your favor. Zora tells accounts of gathering materials and following through on the wishes of the community who want all of these things to take place and gather up the funds to help see their desires to fruition. Zora shares a sort of closure to most of these cases that the person really did die or that the hoodoo actually worked and, though this whole section seemed so dark and bizarre to me, I found myself wondering if perhaps there was some actual truth to Hoodoo's effectiveness, which surprised me in and of itself. And, the very thought that Zora made these specific concoctions published for everyone also gives me the heebie jeebies...just in case you were wondering about how to banish a loved one or something like that. Hopefully, you weren't.

So this work is important as a historical document and it is an interesting one as well. I'm glad it exists and am sad poor Zora suffered in her later life and it didn't seem like she was nearly as appreciated for being both a great writer as well as a female writer and an African American female writer as she should have been while she was alive. Hopefully, her spirit is happy now.… (more)
Fewer

Dust Tracks on a Road by Zora Neale Hurston
I Love Myself When I Am Laughing And Then Again When I Am Looking Mean & Impressive by Zora Neale Hurston
In Search Of Our Mothers' Gardens - Womanist Prose by Alice Walker
Their Eyes Were Watching God: A Novel by Zora Neale Hurston
The salt eaters by Toni Cade Bambara
8 more
Blacker the Berry. . . by Wallace Thurman
Tar Baby by Toni Morrison
Sister Outsider: Essays and Speeches (Crossing Press Feminist Series) by Audre Lorde
Mama Day by Gloria Naylor
The third life of Grange Copeland by Alice Walker
Breaking ice : an anthology of contemporary African-American fiction by Terry McMillan
For colored girls who have considered suicide, when the rainbow is enuf : a choreopoem by Ntozake Shange
Meridian by Alice Walker
Fewer