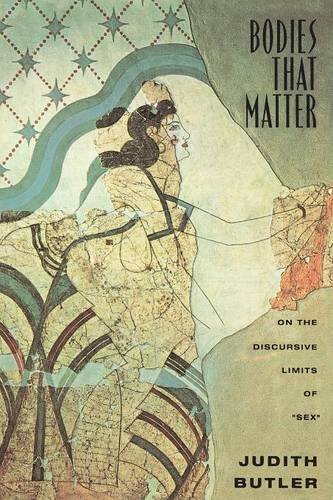 Bodies That Matter: On the Discursive Limits of Sex

In Bodies That Matter,Judith Butler further develops her distinctive theory of gender by examining the workings of power at the most "material" dimensions of sex and sexuality. Deepening the inquiries she began in GenderTrouble,Butler offers an original reformulation of the materiality of bodies, examining how the power of heterosexual hegemony forms the "matter" of bodies, sex, and gender. Butler argues that power operates to constrain "sex" from the start, delimiting what counts as a viable sex. She offers a clarification of the notion of "performativity" introduced in Gender Troubleand explores the meaning of a citational politics. The text includes readings of Plato, Irigaray, Lacan, and Freud on the formation of materiality and bodily boundaries; "Paris is Burning," Nella Larsen's "Passing," and short stories by Willa Cather; along with a reconsideration of "performativity" and politics in feminist, queer, and radical democratic theory.… (more)

LibraryThing member logocentric
I have just read this book. I think it shows any reader of Butler just how demanding her texts can be, but if you maintain a certain 'discipline' the rewards are certainly well worth it. This book represents for Butler her re-working of some of her arguments in her earlier book Gender Trouble. In particular she moves towards an idea of the "materialization of sex". She also has some chapters on Nella Larson's Passing, and of course her continuing conversation with Lacan and Zizek. Overall if you are in any way a theory head, this book is over the top in its absolutely greatness.… (more)
2 more
LibraryThing member amydross
Basically a riposte to the critics of Butler's earlier Gender Trouble (of which I was one), this text is a much clearer and more rigorous articulation of the logic behind performativity. The theory remains problematic in places (which, to her credit, Butler acknowledges for the most part), but there is no question that this text is a major contribution to the canon of poststructuralist theory.… (more)
LibraryThing member DarthDeverell
In Bodies That Matter, Judith Butler builds upon her previous work, Gender Trouble, and argues, “The category of ‘sex’ is, from the start, normative; it is what Foucault called a ‘regulatory ideals’” (pg. xi). Practice, specifically regulated practice, materializes these ideals. In a lengthy passage, Butler discusses the role of gender, writing,
If gender consists of the social meanings that sex assumes, then sex does not accrue social meanings as additive properties but, rather, is replaced by the social meanings it takes on; sex is relinquished in the course of that assumption, and gender emerges, not as a term in a continued relationship of opposition to sex, but as the term which absorbs and displaces “sex,” the mark of its full substantiation into gender or what, from a materialists point of view, might constitute a full desubstantiation (pg. xv).
In order to achieve her analytical framework, Butler proposes “in place of these conceptions of constructions is a return to the notion of matter, not as a site or surface, but as a process of materialization that stabilizes over time to produce the effect of boundary, fixity, and surface we call matter” (pg. xviii). Butler’s examination draws upon a wide array of sources, including Plato’s Timeus, Freud, Jacques Lacan, Willa Cather, Nella Larsen, and more. Butler’s purpose in writing was “to understand how what has been foreclosed or banished from the proper domain of ‘sex’…might at once be produced as a troubling return, not only as an imaginary contestation that effects a failure in the workings of the inevitable law, but as an enabling disruption, the occasion for a radical rearticulation of the symbolic horizon in which bodies come to matter at all” (pg. xxx). These run-on sentences pervade Butler’s writing and often obscure her meaning and argument.
Butler separates gender from sex. For Butler, sex is a person’s physical, biological sex, while gender is an identity both the individual and society construct that is not necessarily based on their physical sex. Butler’s use of film and novels as sources works since these media reach a wide audience and shape ideas, though I doubt the average audience reads Plato’s Timaeus. Unfortunately, Butler buries many of her main concepts in her prose. Butler’s hypotheses evoke Duden’s discussion of the fluid nature of gender in eighteenth century Germany, especially when Duden wrote “Many of the manifestations that we clearly perceive as sex characteristics, were in the seventeenth and eighteenth centuries not unequivocal signs for the difference between man and woman…The eye of culture sees in the order of nature what it expects to see” (Barbara Duden, The Woman Beneath the Skin: A Doctor’s Patients in Eighteenth-Century Germany [Cambridge, MA: Harvard University Press, 1991], 113).… (more)
Fewer

Bodies That Matter: On the Discursive Limits of Sex by Judith Butler (Paperback)

Gender Trouble: Feminism and the Subversion of Identity (Thinking Gender Series) by Judith Butler
Volatile Bodies: Toward a Corporeal Feminism (Theories of Representation and Difference) by Elizabeth Grosz
Undoing gender by Judith Butler
Epistemology of the Closet by Eve Kosofsky Sedgwick
The Straight Mind: And Other Essays by Monique Wittig
10 more
This Sex Which Is Not One by Luce Irigaray
Space, Time and Perversion: Essays on the Politics of Bodies by Elizabeth Grosz
Touching Feeling: Affect, Pedagogy, Performativity (Series Q) by Eve Kosofsky Sedgwick
In a Queer Time and Place: Transgender Bodies, Subcultural Lives (Sexual Cultures) by J. Jack Halberstam
Precarious Life: The Powers of Mourning and Violence by Judith Butler
Feminists Theorize the Political by Judith Butler
Disidentifications: Queers Of Color And The Performance Of Politics (Cultural Studies of the Americas) by José Esteban Muñoz
Queer Theory: An Introduction by Annamarie Jagose
Modest_Witness@Second_Millennium.FemaleMan_Meets_OncoMouse: Feminism and Technoscience by Donna J. Haraway
Tendencies (Series Q) by Eve Kosofsky Sedgwick
Fewer