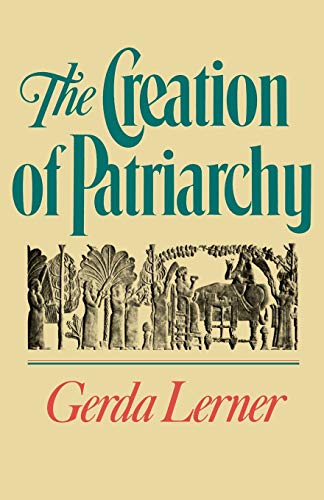 The Creation of Patriarchy (Women and History; V. 1)

A major new work by a leading historian and pioneer in women's studies, The Creation of Patriarchy is a radical reconceptualization of Western civilization that makes gender central to its analysis. Gerda Lerner argues that male dominance over women is not "natural" or biological, but the product of an historical development begun in the second millennium B.C. in the Ancient Near East. As patriarchy as a system of organizing society was established historically, she contends, it can also be ended by the historical process. Focusing on the contradiction between women's central role in creating society and their marginality in the meaning-giving process of definition and interpretation, Lerner explores such fascinating questions as: What can account for women's exclusion from the historical process? What could explain the long delay--more than 3,500 years--in women's coming to consciousness of their own subordinate position? She goes back to the cultures of the earliest known civilizations--those of the ancient Near East--to discover the origins of the major gender metaphors of Western civilization. Using historical, literary, archaeological, and artistic evidence, she then traces the development of these ideas, symbols, and metaphors and their incorporation into Western civilization as the basis of patriarchal gender relations.… (more)

The Creation of Feminist Consciousness: From the Middle Ages to Eighteen-seventy (Women and History 2) by Gerda Lerner
The War Against Women by Marilyn French
Gyn/ecology, the metaethics of radical feminism by Mary Daly
Women of ideas : and what men have done to them from Aphra Behn to Adrienne Rich by Dale Spender
The Female Experience: An American Documentary by Gerda Lerner
29 more
The politics of reality : essays in feminist theory by Marilyn Frye
Beyond Power: On Women, Men and Morals by Marilyn French
The Dialectic of Sex The Case for Feminist Revolution by Shulamith Firestone
Sisterhood is Global: The International Women's Movement Anthology by Robin Morgan
Not in God's image by Lauro Martines
Women's reality: An emerging female system in the white male society by Anne Wilson Schaef
It Changed My Life: Writings on the Women's Movement by Betty Friedan
Femininity - by Susan Brownmiller
Feminism unmodified : discourses on life and law by Catharine A. MacKinnon
Woman's estate by Juliet Mitchell
Gender and the Politics of History, revised edition by Joan Wallach Scott
The Mermaid and The Minotaur Sexual Arrangements and Human Malaise by Dorothy Dinnerstein
Against Our Will by Susan Brownmiller
Feminist Frameworks: Alternative Theoretical Accounts of the Relations Between Women and Men by Alison M. Jaggar
Intercourse by Andrea Dworkin
The Word of a Woman: Feminist Dispatches, 1968-1992 by Robin Morgan
The Chalice and the Blade: Our History, Our Future by Riane Eisler
Sexual Politics by Kate Millet
Woman, culture, and society by Michelle Zimbalist Rosaldo
Woman's Consciousness, Man's World (Radical Thinkers) by Sheila Rowbotham
Inessential Woman by Elizabeth V. Spelman
A feminist dictionary by Cheris Kramarae
Beyond God the Father: Toward a Philosophy of Women's Liberation by Mary Daly
Common differences; conflicts in black and white feminist perspectives. by Gloria Joseph
Women, Resistance & Revolution: A History of Women and Revolution in the Modern World by Sheila Rowbotham
This Bridge Called My Back, Fourth Edition: Writings by Radical Women of Color by Cherríe Moraga
In a Different Voice: Psychological Theory and Women's Development by Carol Gilligan
Capitalist Patriarchy and the Case for Socialist Feminism by Zillah R. Eisenstein
Right Wing Women by Andrea Dworkin
Fewer