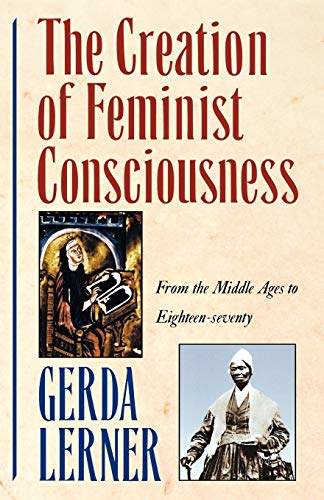 The Creation of Feminist Consciousness: From the Middle Ages to Eighteen-seventy (Women and History 2)

A pioneer in women's studies and long-term activist for women's issues, and a past president of the Organization of American Historians, Gerda Lerner is one of the founders and foremost scholars of Women's History. The Creation of Patriarchy, the first book in her two-volume magnum opus Women and History (1986) received wide review attention and much acclaim, winning the prestigious Joan Kelly Prize of the American Historical Association for the best work on Women's History that year. Ms hailed the book for providing "a grand historical framework that was impossible even to imagine before the enlightenment about women's place in the world provided by her earlier work and that of other feminist scholars." New Directions for Women said it "may well be the most important work in feminist theory to appear in our generation." Patriarchy traced the development of the ideas, symbols, and metaphors by which men institutionalized their domination of women. Now, in The Creation of Feminist Consciousness, the eagerly awaited concluding volume of Women and History, Lerner documents the twelve-hundred-year struggle of women to free their minds from patriarchal thought, to create Women's History, and to achieve a feminist consciousness. Lerner argues that the millenia-old educational disadvantaging of women and their marginalization in the intellectual life of Western civilization retarded women's ability to comprehend their condition and to define their needs as a group. She shows the devastating impact on women's psychology of notions of their innate mental inferiority, reinforced generation after generation by the teachings of family, church, and state. Through examining over a thousand years of feminist biblical criticism, Lerner illustrates her most important insight--the discontinuity of women's history. The generation to generation transmission of knowledge on which the building of civilization rests did not work for women. Because they did not know their history, each generation of women used their energies and talents reinventing ideas that other women had already defined--this greatly delayed the development of women's consciousness of themselves as members of a group. In a series of fascinating portraits of individual women who resisted patriarchal indoctrination, Lerner discusses women mystics such as Hildegard of Bingen, Julian of Norwich and later Protestant mystics, and brings to life the many women of great literary talent, from Christine de Pisan to Louise Labe to Emily Dickinson, who simply bypassed patriarchal thought and created alternate worlds for themselves. In its emphasis on the force of ideas, the struggle of women for inclusion in the concept of the Divine, the repeated attempts by women to form supportive networks, and its analysis of the preconditions for the formation of political theories of liberation, this brilliant work charts new ground for historical studies, the history of ideas, and feminist theory.… (more)

Women of ideas : and what men have done to them from Aphra Behn to Adrienne Rich by Dale Spender
Women, Resistance & Revolution: A History of Women and Revolution in the Modern World by Sheila Rowbotham
The War Against Women by Marilyn French
Women: A Feminist Perspective by Jo Freeman
Women's reality: An emerging female system in the white male society by Anne Wilson Schaef
28 more
The Female Experience: An American Documentary by Gerda Lerner
The Second Stage by Friedan, Betty published by Simon & Schuster Hardcover by Betty Fridan
Backlash: The Undeclared War Against Women by Susan Faludi
Sisterhood is Global: The International Women's Movement Anthology by Robin Morgan
Feminist Theorists: Three centuries of key women thinkers by Dale Spender
Century of Struggle: The Woman's Rights Movement in the United States by Eleanor Flexner
Gyn/ecology, the metaethics of radical feminism by Mary Daly
A feminist dictionary by Cheris Kramarae
The politics of reality : essays in feminist theory by Marilyn Frye
Black Women in White America: A Documentary History by Gerda Lerner
Toward a New Psychology of Women by Jean Baker Miller
Woman, culture, and society by Michelle Zimbalist Rosaldo
Woman's estate by Juliet Mitchell
Going Too Far: The Personal Chronicle of a Feminist by Robin Morgan
Inessential Woman by Elizabeth V. Spelman
Beyond God the Father: Toward a Philosophy of Women's Liberation by Mary Daly
Feminist Frameworks: Alternative Theoretical Accounts of the Relations Between Women and Men by Alison M. Jaggar
Against Our Will by Susan Brownmiller
The first sex by Elizabeth Gould Davis
Sexual Politics by Kate Millet
Daring to be Bad: Radical Feminism in America, 1967-75 (American Culture) by Alice Echols
The Dialectic of Sex The Case for Feminist Revolution by Shulamith Firestone
The Word of a Woman: Feminist Dispatches, 1968-1992 by Robin Morgan
Women & Economics by Charlotte Perkins Gilman
Radical feminism by Anne Koedt
The Mermaid and The Minotaur Sexual Arrangements and Human Malaise by Dorothy Dinnerstein
Sisterhood Is Powerful: An Anthology of Writings from the Womens Liberation Movement by Robin Morgan
Root of Bitterness by Nancy F. Cott
Fewer