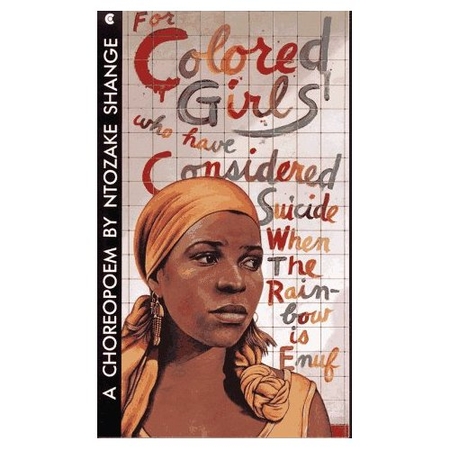 For colored girls who have considered suicide, when the rainbow is enuf : a choreopoem

A revolutionary, award-winning play by a lauded playwright and poet about the experiences of women of color. From its inception in California in 1974 to its highly acclaimed critical success at Joseph Papp's Public Theater and on Broadway, the Obie Award-winning for colored girls who have considered suicide/when the rainbow is enuf has excited, inspired, and transformed audiences all over the country. Passionate and fearless, Shange's words reveal what it is to be of color and female in the twentieth century. First published in 1975 when it was praised by The New Yorker for "encompassing...every feeling and experience a woman has ever had," for colored girls who have considered suicide/when the rainbow is enuf will be read and performed for generations to come. Here is the complete text, with stage directions, of a groundbreaking dramatic prose poem written in vivid and powerful language that resonates with unusual beauty in its fierce message to the world.… (more)

LibraryThing member lhicks5
This book would be an excellent resource for a theater arts class. It does not follow the flow of a traditional play, which might frustrate younger readers. It is, however, a creative alternative to traditional plays and presents the theme of black female identity, which many young females might find fascinating.
8 more
LibraryThing member debnance
Dark play, written as poem, relating lives of black women. Captivating. A tiny bit preachy at times.
LibraryThing member omame
Beautiful and lively. Would love to see this performed.
LibraryThing member noodlejet22
This slim volume is set for stage performance. These poems ring true even today about women, love, family, abuse, relationships, identity, and friendship among women. Most would say that these poems are only about the African-American experience but I would challenge that notion in that women in society have common issues and goals. Shange has a gift in that she is able to transport the reader along as the women in the play feel and experience the retelling of their stories. The women are each dressed in a different color- of the rainbow perhaps. In the end they have each other even after all that they've been through, even after the pain of telling their stories these women continue to support one another. We see that the rainbow is enough, it is a celebration of friendship and support among women.… (more)
LibraryThing member shannonkearns
I enjoyed reading this, but I think this is one of those pieces that really can't be done justice simply in print.
LibraryThing member SoulFlower1981
I am a huge fan of the movie "For Colored Girls" that is based off of this book and I thought that I should finally look to see if my University Library had a copy of it. Indeed they did have a copy of it. I devoured the pages within the matter of an hour. This book is riveting and really showcases well the voice of an African-American woman. We can learn from this book about their struggles and experiences. I would recommend this to anyone that is in a field that works with a variety of individuals. This will give you some great insights and will also move you to tears by the end.… (more)
LibraryThing member DanielSTJ
This one missed the mark for me. While there were some interesting passages in it, and the idea was inherently decent, I didn't feel connected with the characters. This, perchance, may be because the play was set in its time and I'm so disconnected from what it speaks of. It was not a bad play, and I think it has it's merits, but I also agree with the fact that it is not for all audiences-- myself included.

2 stars.… (more)
LibraryThing member jessicaundomiel
I first heard about Ntozake Shange's choreopoem when it was being made into a movie by Tyler Perry. My attention was caught by the advertisements on the radio during my commute to and from work. Though I still have not seen the film, I purchased the book with every intention of reading it right away. Sadly, it sat on my shelf and moved across the country with me in a box of several other books that are fighting for my attention amid the distractions of working life.

The stage directions and descriptions bring the stories of the poems to life. Reading this book conjures the image of women in colorful dresses dancing around a stage, chanting and singing these stories that are shared by the sisterhood of all women. Shange's work calls each of us to share in that bond.… (more)
LibraryThing member poetontheone
Ntozake Shange's powerful and vivid fusion of poetry and drama deftly maps the internal battles of black female identity and the inadequacy of language to express it, rumbling with the fury of what it means to be both an invisible presence whose voice is not heard and whose worth is not valued, and a visible commodity whose body and very personhood is objectified and reduced to utility for others as victim, lover, mother, and slave. At the same, the narrative rallies against this with a fierce and lyrical rebellion wrought with sharp wit, humor, and hope. Any student of American literature, poetry, drama, gender studies, or race studies must consider and carefully weigh the importance of this work.… (more)
Fewer

For Colored Girls Who Have Considered Suicide by Ntozake Shange (Hardcover)

Nappy edges by Ntozake Shange
Sister Outsider: Essays and Speeches (Crossing Press Feminist Series) by Audre Lorde
In Search Of Our Mothers' Gardens - Womanist Prose by Alice Walker
Women, Race, & Class by Angela Y. Davis
To Be Young, Gifted and Black: An Informal Autobiography (Signet) by Lorraine Hansberry
24 more
But Some Of Us Are Brave: All the Women Are White, All the Blacks Are Men: Black Women's Studies by Gloria T. Hull
Zami, a new spelling of my name by Audre Lorde
Ain't I a Woman: Black Women and Feminism by bell hooks
The women of Brewster Place by Gloria Naylor
This Bridge Called My Back, Fourth Edition: Writings by Radical Women of Color by Cherríe Moraga
Home Girls: A Black Feminist Anthology by Barbara Smith
When and Where I Enter: The Impact of Black Women on Race and Sex In America by Paula Giddings
I Love Myself When I Am Laughing And Then Again When I Am Looking Mean & Impressive by Zora Neale Hurston
Blacker the Berry. . . by Wallace Thurman
Black Feminist Thought: Knowledge, Consciousness, and the Politics of Empowerment (Revised 10th Anniv 2nd Edition) by Patricia Hill Collins
Dust Tracks on a Road by Zora Neale Hurston
Selected poems by Gwendolyn Brooks
Sisters of the Yam: Black Women and Self-Recovery by bell hooks
Talking Back: Thinking Feminist, Thinking Black by bell hooks
The Collected Poems of Audre Lorde by Audre Lorde
'night, Mother: A Play (Mermaid Dramabook) by Marsha Norman
Feminist theory : from margin to center by Bell Hooks
Assata : an autobiography by Assata Shakur
Horses Make a Landscape Look More Beautiful by Alice Walker
The salt eaters by Toni Cade Bambara
A Taste of Power - A Black Woman's Story (Black Panthers) by Elaine Brown
Black Women in White America: A Documentary History by Gerda Lerner
Mama Day by Gloria Naylor
Playing in the dark : whiteness and the literary imagination by Toni Morrison
Fewer