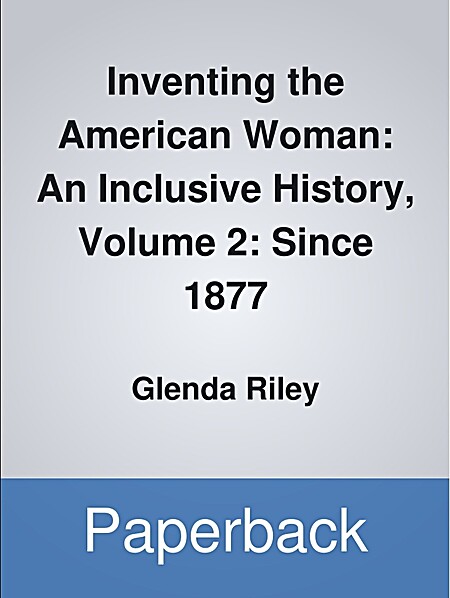 Inventing the American Woman: An Inclusive History, Volume 2: Since 1877

When the first edition of this groundbreaking survey of U.S. women's history first appeared in 1986, no one could have predicted its spectacular success and widespread support--or the vast proliferation of women's history courses in the nation's high schools, colleges, and universities. Informed by the generous feedback of many of "Inventing"'s loyal users--student readers and instructors from every region of the nation--the fourth edition of Glenda Riley's dynamic text remains the most inclusive, accessible, and affordable choice as a core text for the Women's History course, as well as useful supplementary reading for courses in Women's Studies and the U.S. survey. Completely up to date, with expanded coverage of women in the military, sports, women's healthcare, divorce, and women of color--especially Spanish-speaking, American Indian, African American, and Asian American women--this well-balanced, interpretive account portrays the myriad of women's experiences as they shaped and were shaped by American history, and redounds as a remarkable feat of insight and inclusion. As always, each volume features a stunning photographic essay, a visual account from the colonial era to the present.… (more)

Inventing the American Woman: An Inclusive History, Volume 1: To 1877 by Glenda Riley
Major problems in American women's history : documents and essays by Mary Beth Norton
Unequal Sisters: A Multicultural Reader in U.S. Women's History by Vicki Ruiz
Pushout: The Criminalization of Black Girls in Schools by Monique W. Morris
Ain't I a Woman: Black Women and Feminism by bell hooks
32 more
On Women Turning Forty: Coming into Our Fullness by Cathleen Rountree
Feminism without Borders: Decolonizing Theory, Practicing Solidarity by Chandra Talpade Mohanty
Feminism and Suffrage: The Emergence of an Independent Women's Movement in America, 1848-1869 by Ellen Carol DuBois
Colonize This!: Young Women of Color on Today's Feminism (Live Girls) by Daisy Hernández
But Some Of Us Are Brave: All the Women Are White, All the Blacks Are Men: Black Women's Studies by Gloria T. Hull
Women's Diaries of the Westward Journey by Lillian Schlissel
Spider Woman's Granddaughters: Traditional Tales and Contemporary Writing by Native American Women by Paula Gunn Allen
Black Feminist Thought: Knowledge, Consciousness, and the Politics of Empowerment (Revised 10th Anniv 2nd Edition) by Patricia Hill Collins
Sister Outsider: Essays and Speeches (Crossing Press Feminist Series) by Audre Lorde
The Sacred Hoop by Paula Gunn Allen
this bridge we call home: radical visions for transformation by Gloria Anzaldúa
Chinese Women of America: A Pictorial History by Judy Yung
Disorderly Conduct: Visions of Gender in Victorian America by Carroll Smith-Rosenberg
Interpreting Women's Lives: Feminist Theory and Personal Narratives by Personal Narratives Group
Silences by Tillie Olsen
Women Teachers on the Frontier by Polly Welts Kaufman
This Bridge Called My Back, Fourth Edition: Writings by Radical Women of Color by Cherríe Moraga
Ladies of Seneca Falls (Studies in the Life of Women) by Miriam Gurko
Sex and Scientific Inquiry by Sandra Harding
A New England Girlhood: Outlined from Memory (Outlines from Memory) by Lucy Larcom
Feminist theory : from margin to center by Bell Hooks
Women's America: Refocusing the Past by Linda K. Kerber
Mother Reader: Essential Writings on Motherhood by Moyra Davey
Woman, culture, and society by Michelle Zimbalist Rosaldo
The War Against Women by Marilyn French
Who Cooked the Last Supper: The Women's History of the World by Rosalind Miles
Words of Fire: An Anthology of African-American Feminist Thought by Beverly Guy-Sheftall
Listen up : voices from the next feminist generation by Barbara Findlen
Century of Struggle: The Woman's Rights Movement in the United States by Eleanor Flexner
A History of Their Own: Women in Europe from Prehistory to the Present, Vol. 1 by Bonnie S Anderson
To Be Real: Telling the Truth and Changing the Face of Feminism by Rebecca Walker
For Her Own Good: 150 Years of the Experts' Advice to Women by Barbara Ehrenreich
Fewer