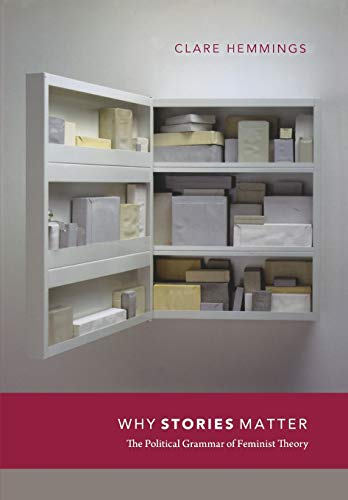 Why Stories Matter: The Political Grammar of Feminist Theory (Next Wave: New Directions in Women's Studies)

Why Stories Matter is a powerful critique of the stories that feminists tell about the past four decades of Western feminist theory. Clare Hemmings examines the narratives that make up feminist accounts of recent feminist history, highlights the ethical and political dilemmas raised by these narratives, and offers innovative strategies for transforming them. Drawing on her in-depth analysis of feminist journals, such as Signs, Feminist Review, and Feminist Theory, Hemmings argues that feminists portray the development of Western feminism through narratives of progress, loss, and return. Whether celebrating the move beyond unity or identity, lamenting the demise of a feminist political agenda, or proposing a return to a feminist vision from the past, by advancing these narratives feminists construct a mobile "political grammar" too easily adapted for postfeminist agendas. Hemmings insists that it is not enough for feminist theorists to lament what is most often perceived as the co-optation of feminism in global arenas. They must pay attention to the amenability of their own stories, narrative constructs, and grammatical forms to broader discursive uses of gender and feminism if history is not simply to repeat itself. Since citation practices and the mobilization of affect are central to how the narratives of progress, loss, and return persuade readers to suspend disbelief, they are also potential keys to telling the story of feminism's past, present, and future differently.… (more)

Gender and the Politics of History, revised edition by Joan Wallach Scott
The Creation of Patriarchy (Women and History; V. 1) by Gerda Lerner
Women's History of the World by Rosalind Miles
No Turning Back: The History of Feminism and the Future of Women by Estelle Freedman
The Feminist Promise: 1792 to the Present (Modern Library Chronicles) by Christine Stansell
22 more
Women, Resistance & Revolution: A History of Women and Revolution in the Modern World by Sheila Rowbotham
Feminism in Our Time: The Essential Writings, World War II to the Present by Miriam Schneir
Words of Fire: An Anthology of African-American Feminist Thought by Beverly Guy-Sheftall
The Word of a Woman: Feminist Dispatches, 1968-1992 by Robin Morgan
Volatile Bodies: Toward a Corporeal Feminism (Theories of Representation and Difference) by Elizabeth Grosz
Daring to be Bad: Radical Feminism in America, 1967-75 (American Culture) by Alice Echols
Feminism without Borders: Decolonizing Theory, Practicing Solidarity by Chandra Talpade Mohanty
The Creation of Feminist Consciousness: From the Middle Ages to Eighteen-seventy (Women and History 2) by Gerda Lerner
A Xicana Codex of Changing Consciousness: Writings, 2000–2010 by Cherríe L. Moraga
Sisterhood Is Forever: The Women's Anthology for a New Millennium by Robin Morgan
Living for the Revolution: Black Feminist Organizations, 1968–1980 by Kimberly Springer
Inessential Woman by Elizabeth V. Spelman
Feminist Practice and Poststructuralist Theory by Chris Weedon
Our Feet Walk the Sky: Women of the South Asian Diaspora by Sheela Bhatt
Gaga Feminism: Sex, Gender, and the End of Normal (Queer Ideas/Queer Action) by J. Jack Halberstam
Women and Values: Readings in Recent Feminist Philosophy by Marilyn Pearsall
Feminist Studies / Critical Studies (Theories of Contemporary Culture) by Teresa de de Lauretis
Sisterhood is Global: The International Women's Movement Anthology by Robin Morgan
Woman's estate by Juliet Mitchell
Arrested Justice: Black Women, Violence, and America's Prison Nation by Beth E. Richie
Fortunes of Feminism: From State-Managed Capitalism to Neoliberal Crisis by Nancy Fraser
The War Against Women by Marilyn French
Fewer