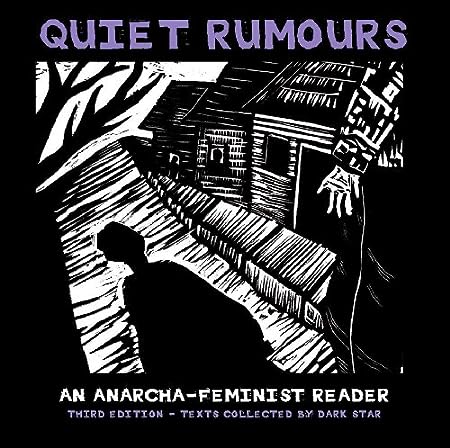 This is a fascinating window into the development of the women's movement in the words of those who moved it. Compiled and introduced by the UK-based anarchist collective Dark Star, Quiet Rumours features articles and essays from four generations of anarchist-inspired feminists, including Emma Goldman, Voltairine de Cleyre, Jo Freeman, Peggy Kornegger, Cathy Levine and beyond. All the pieces from the first two editions are included here, as well as new material bringing third and so-called fourth-wave feminism into conversation with twenty-first century politics.

LibraryThing member magonistarevolt
Quiet Rumours seems like a work in progress, not a finished product. The essays inside are hit-or-miss. I loved some, and I was unimpressed by others. Some challenged me, others didn't. Spanning a century and a globe, they are not consistent, and they are poorly organized: neither by chronology nor theme.

For the most part, the book includes anarchist writings about feminism, and feminist writings about anarchism. But the book failed to demonstrate a synthesis of the two, and instead contented itself on showing a symbiosis. Whereas I was reading the book to learn about the intersection of the two concepts, I came away with what I already brought: that they were paralell, and both necessary for a just society.

The essays in the beginning did a lot of insisting that anarchism and feminism were interrelated without explaining why or how. The two-essay debate about structure and tyranny were practical looks at trying to synthesize at least a practice of their intersection if not a theory, but when presented together, they merely contradicted one another. The most inspiring and wonderful articles that came close to this synthesis were written by those, such as the Bolivian Mujeres Creando ("I've said it and I'll say it again that we're not anarchists by Bakunin or the CNT, but rather by our grandmothers, and that's a beautiful school of anarchism"- FUCK YES.) who were not trying to self-consciously define their anarchism as exclusionary or individualist. But several of the articles uncompellingly emphasized, in order for the authors to self-consciously differentiate themselves from other Socialists, the individualist tendency of anarchism.

Emma Goldman's "A Woman Without a Country," though a great text, mentioned nothing of feminism, let alone anarchist feminism. It seems it was included because the author was both an anarchist and a feminist.

AK Press and Dark Star made matters far worse for this book. First of all, there were typos in the text, one unfortunate and notable one being the word "his" where it should have said "has." Secondly, The book felt more like 400 pages than 116 pages. The type was *way* too small, sans-serif, and divided into two columns per page. This made every page take an eternity to read, and I spent a good while after every time I put the book down trying to find where I was (4 columns and 47 lines to check!). No one could call this book a page-turner. Thirdly, the pages were so large that the binding broke apart while I was reading it, which distracted greatly from the final essays, which I read while gingerly holding the book so that the wind wouldn't carry them away.

Don't get me wrong, the topic is very worthy, and many of the articles within the book are really quite amazing. But I look forward to a more thoughtful collection of anarcha-feminist works in the future.… (more)