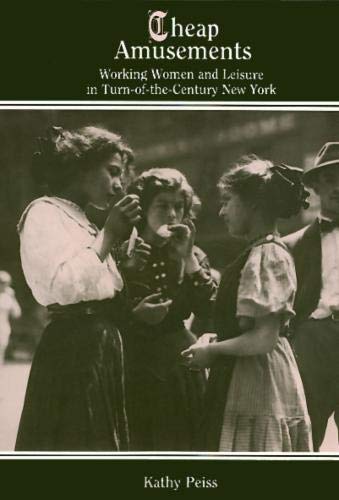 What did young, independent women do for fun and how did they pay their way into New York City's turn-of-the-century pleasure places? Cheap Amusements is a fascinating discussion of young working women whose meager wages often fell short of bare subsistence and rarely allowed for entertainment expenses.Kathy Peiss follows working women into saloons, dance halls, Coney Island amusement parks, social clubs, and nickelodeons to explore the culture of these young women between 1880 and 1920 as expressed in leisure activities. By examining the rituals and styles they adopted and placing that culture in the larger context of urban working-class life, she offers us a complex picture of the dynamics shaping a working woman's experience and consciousness at the turn-of-the-century. Not only does her analysis lead us to new insights into working-class culture, changing social relations between single men and women, and urban courtship, but it also gives us a fuller understanding of the cultural transformations that gave rise to the commercialization of leisure.The early twentieth century witnessed the emergence of "heterosocial companionship" as a dominant ideology of gender, affirming mixed-sex patterns of social interaction, in contrast to the nineteenth century's segregated spheres. Cheap Amusements argues that a crucial part of the "reorientation of American culture" originated from below, specifically in the subculture of working women to be found in urban dance halls and amusement resorts.… (more)

LibraryThing member christina.h
This book was alright. On the one hand, 'Cheap Amusements' does a good job of explaining the roles and expectations of various women living in Industrial America--young, old, native, immigrant, and women of varying class.

On the other hand, I find it bothersome that Peiss does not specify various terms before launching into the book. While it's no trouble for me to look up terms like 'vice investigator' or The Committee of Fourteen, Peiss makes no effort to explain who qualifies as a vice investigator, or what their specific purpose is. She mentions the Committee of Fourteen several times in the book, but does not explain the purpose of the committee's existence until more than half way through the book.

Perhaps it's just my personal preference, but I feel like it's arrogant to assume one's reader to already know the particularities of a time or subject, and that if an author writes this sort of book with the intent to educate, then they should do it to the fullest extent. The alternative is that Peiss just forgot. In which case it's sloppy writing.

Despite the aforementioned, I did come away with knowledge about the era and its treatment of immigrants and women, so for that I am grateful.… (more)
1 more
LibraryThing member Jayeless
So I was mostly reading this for the purposes of writing an essay on how working-class women in turn-of-the-century North America experienced their sexuality, and this book is positively brilliant for learning about that. It draws extensively on primary sources (as you would hope I guess, but I digress...) and paints a vivid picture about how individuals' experiences were shaped by their class, gender and ethnic backgrounds.

One aspect I found particularly interesting was the phenomenon of "treating", by which working-class women would expect their male companions to pay the cost of an outing, their entertainment needs, etc. - and frequently certain other costs as well, like for clothes and shoes. It seems that there was a kind of continuum from this behaviour, through casual prostitution, to "fully-fledged" prostitution... and as someone who cares passionately about women's oppression, I am vehemently opposed to the existence of that industry. However, the practice of "treating" seems to have been qualitatively different, a far more liberating practice which ascribed far more agency to the woman involved. Which is not to say that working women in the 1910s were all sexually free and liberated - far from it! - as Peiss describes, women's wages were so low (below the living wage of the time) that they were economically dependent on men, which pressured them into this behaviour of course. BUT it ALSO means that many working women (although by no means all... again, this tended to vary by things like ethnic background) were able to experiment sexually, flirting and fooling around with boys etc., at a time when this would have (and did...) completely scandalised bourgeois moralists.

In the last chapter, chapter seven, Peiss describes how bourgeois women tried to create some kind of cross-class solidarity among women. I found this interesting because it seems to me that Peiss, as a feminist, really sympathises with these bourgeois reformers' aims, but working women of the time evidently did not! Working-class women, by and large, identified with the men of their own class before the women of the bourgeoisie; they resented bourgeois women's individualism and identified with the labour struggle instead (if they were political) and even if they were not, they preferred to mingle with men - and enjoyed the freer sexual culture of the working class - to stuffy, stultifying notions of respectability.

In all honesty, this was a really fun book to read - and short too! Goodreads claims it's 288 pages, but the copy I read is more like 188, plus endnotes and index etc. - and if you are even remotely interested in sexual liberation or women's oppression (particularly if you, like me, want to research this entire topic in the first place because most studies of women's sexuality ignore working-class women entirely) THIS IS A MUST-READ. I am not even kidding.… (more)
Fewer

Out to work : a history of wage-earning women in the United States by Alice Kessler-Harris
Labor of Love, Labor of Sorrow by Jacqueline Jones
To 'Joy My Freedom: Southern Black Women's Lives and Labors after the Civil War by Tera W. Hunter
Disorderly Conduct: Visions of Gender in Victorian America by Carroll Smith-Rosenberg
Root of Bitterness by Nancy F. Cott
4 more
Immigrant women in the land of dollars : life and culture on the Lower East Side, 1890-1925 by Elizabeth Ewen
Women and the American Labor Movement by Philip S. Foner
Motherhood in black and white : race and sex in American liberalism, 1930-1965 by Ruth Feldstein
Women in Modern America: A Brief History (The Harbrace history of the United States) by Lois W. Banner
Fewer