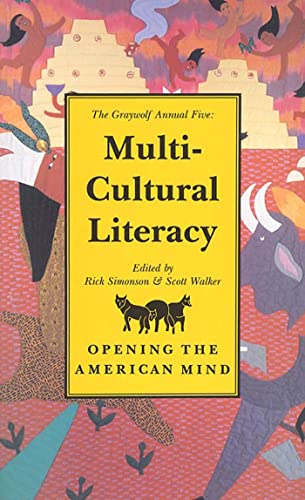 The issue of cultural literacy has been the subject of intense debate in the past two years. Several bestselling books about the deficiencies of our educational system as well as changes in basic curriculum at more than one major university have contributed to the fervor of this debate. Fueling the national controversy is the question of what body of knowledge constitutes cultural literacy. While many argue for a return to a "back to basics" curriculum, equally energetic voices call for a revised curriculum, one which embraces both traditional western classicsand the classics of non-European cultures, among them African, Asian, and Latin American. This volume brings together thirteen essays which suggest the range of knowledgetruly literate individuals need to possess. Essays by such writers as James Baldwin, Carlos Fuentes, Michelle Cliff, Paula Gunn Allen, Ishmael Reed, and Wendell Berry enlarge our perspective to include a variety of voices and heritages which contribute to the vibrant culture of the United States. Also included is a beginning list of names, places, dates, and concepts which are part and parcel of a multi-cultural fabric.… (more)

This Bridge Called My Back, Fourth Edition: Writings by Radical Women of Color by Cherríe Moraga
The Representation of Women in Fiction: Selected Papers from the English Institute, 1981 by Carolyn G. Heilbrun
Crystal Eastman on Women and Revolution by Blanche W. Cook
Teaching to transgress : education as the practice of freedom by Bell Hooks
In Search Of Our Mothers' Gardens - Womanist Prose by Alice Walker
8 more
The Girl by Meridel Le Sueur
Common differences; conflicts in black and white feminist perspectives. by Gloria Joseph
Feminist Studies / Critical Studies (Theories of Contemporary Culture) by Teresa de de Lauretis
Talking Back: Thinking Feminist, Thinking Black by bell hooks
Women Class And The: Feminist Imagination (Women In The Political Economy) by Karen Hansen
Women and Russia : feminist writings from the Soviet Union by Tatyana Mamonova
Toward an anthropology of women by Rayna R. Reiter
Teaching Community: A Pedagogy of Hope by bell hooks
Fewer