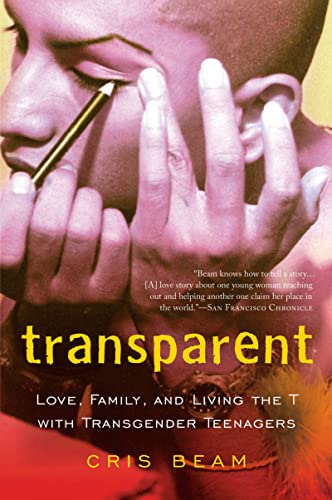 Transparent: Love, Family, and Living the T with Transgender Teenagers

When Cris Beam first moved to Los Angeles, she thought she might put in just a few hours volunteering at a school for transgender kids while she got settled. Instead she found herself drawn deeply into the pained and powerful group of transgirls she discovered. InTransparentshe intro­duces four of them--Christina, Domineque, Foxxjazell, and Ariel--and shows us their world, a dizzying mix of familiar teenage cliques and crushes with far less familiar challenges like how to morph your body on a few dollars a day. Funny, heartbreaking, defiant, and sometimes defeated, the girls form a singular community. But they struggle valiantly to resolve the gap between the way they feel inside and the way the world sees them--a struggle we can all identify with.   Beam's careful reporting, sensitive writing, and intimate relationship with her characters placeTransparent in the ranks of the best narrative nonfiction.… (more)

LibraryThing member unknown_zoso05
Cris Beam sets out to show that gender is not defined by what is below the belt through four transgendered girls. Transparent is very well written because it takes on the challenges of accepting gender and its place in the lives of transitioning teenagers. It breaks apart the intricacies of transsexuality - from dressing up, hormones and dating violence. The book is more memoir than sociological.… (more)

Trans Liberation: Beyond Pink or Blue by Leslie Feinberg
Whipping girl : a transsexual woman on sexism and the scapegoating of femininity by Julia Serano
Transgender History (Seal Studies) by Susan Stryker
Gender Outlaw: On Men, Women, and the Rest of Us by Kate Bornstein
Trans/forming Feminisms: Transfeminist Voices Speak Out by Krista Scott-Dixon
5 more
Why Can't Sharon Kowalski Come Home? by Karen Thompson
GenderQueer : voices from beyond the sexual binary by Joan Nestle
The lesbian parenting book : a guide to creating families and raising children by D. Merilee Clunis
I Am My Own Wife: The True Story of Charlotte von Mahlsdorf by Charlotte von Mahlsdorf
She's Not There: A Life in Two Genders by Jennifer Finney Boylan
Fewer