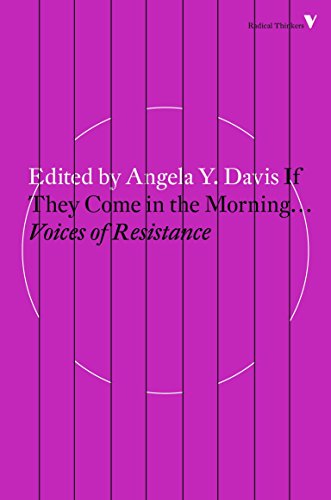 If They Come in the Morning... (Radical Thinkers)

The trial of Angela Davis is remembered as one of America's most historic political trials, and no one can tell the story better than Davis herself. Opening with a letter from James Baldwin to Angela Davis, and including contributions from numerous radicals and commentators such as Black Panthers George Jackson, Huey P. Newton, Bobby Seale and Erica Huggins, this book is not only an account of Davis's incarceration and the struggles surrounding it, but also perhaps the most comprehensive and thorough analysis of the prison system of the United States and the figure embodied in Davis's arrest and imprisonment-the political prisoner. Since the book was written, the carceral system in the US has grown from strength to strength, with more of its black population behind bars than ever before. The scathing analysis of the role of prison and the policing of black populations offered by Davis and her comrades in this astonishing volume remains as relevant today as the day it was published.… (more)

Assata : an autobiography by Assata Shakur
Are Prisons Obsolete? by Angela Y. Davis
A Taste of Power - A Black Woman's Story (Black Panthers) by Elaine Brown
Invisibility Blues: From Pop to Theory (Haymarket) by Michele Wallace
Women, Race, & Class by Angela Y. Davis
8 more
From #BlackLivesMatter to Black liberation by Keeanga-Yamahtta Taylor
The meaning of freedom by Angela Y. Davis
Freedom Is a Constant Struggle: Ferguson, Palestine, and the Foundations of a Movement by Angela Davis
Peasant-citizen and slave : the foundations of Athenian democracy by Ellen Meiksins Wood
Black Macho and the Myth of the Superwoman (Feminist Classics) by Michele Wallace
Playing the Whore: The Work of Sex Work (Jacobin) by Melissa Gira Grant
The Anti-Social Family (Radical Thinkers) by Michele Barrett
Revolting prostitutes : the fight for sex workers' rights by (Sex worker) Molly Smith
Fewer