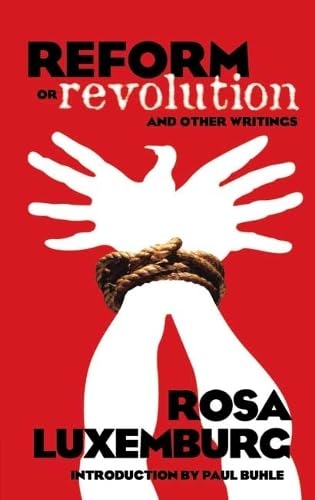 Reform or revolution and other writings

A polemic writing by the famous "Red Rosa" Luxemburg, Reform or Revolution (1899) explains why capitalism can never overcome its internal contradictions. An effective refutation of revisionist interpretations of Marxist doctrine, it defines the position of scientific socialism on the issues of social reforms, the state, democracy, and the character of the proletarian revolution. Reform or Revolution opposes Edward Bernstein's revisionist theories, which rejected Marxism in favor of trade unionism and parliamentary procedures. Luxemburg offers articulate and reasoned objections to all of Bernstein's arguments. She defends the necessity for socialism, which provides an answer to the contradictions and inevitable crisis of the capitalist economy, along with a means for a transformation in working class consciousness. This essay remains a key explanation of why there can be no parliamentary road to socialism. It appears here together with Luxemburg's writings on "Leninism or Marxism," "The Mass Strike," and "The Russian Revolution."… (more)

LibraryThing member miquixote
Rosa was amazingly prescient. .She predicted that imperialists would continue to impose their style of democracy in the 3rd world where the rich are the only ones who get freedom. That they would continue to destroy whoever gets in their way: ie. military /CIA coups. That even in the 1st world, capitalism would capitalize on anything to pick apart our rights. Homeland security, the war on drugs, whatever excuse they can come up with. Liberals (blair, obama are no different and will we ever learn?) are often equally as guilty.
Her comments on imperial war, mass murder , expansion of capitalism , how war is essential to capitalist development make us realize how relevant her views were to today, as we watch wars with Iraq, Afghanistan, (Iran?)…

The origin of the family, private property, and the state by Friedrich Engels
The Origin of Capitalism: A Longer View by Ellen Meiksins Wood