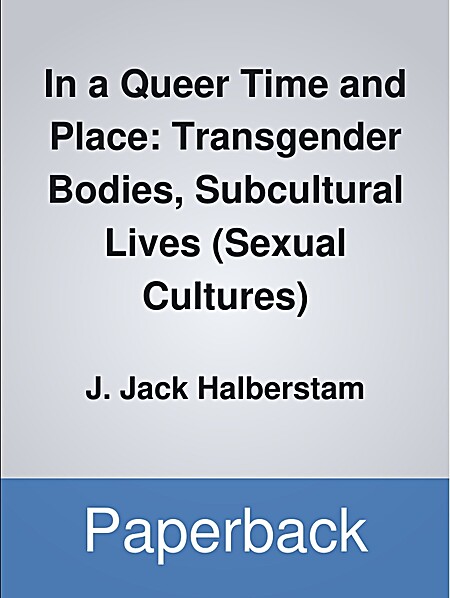 The first full-length study of transgender representations in art, fiction, film, video, and music In her first book since the critically acclaimed Female Masculinity, Judith Halberstam examines the significance of the transgender body in a provocative collection of essays on queer time and space. She presents a series of case studies focused on the meanings of masculinity in its dominant and alternative forms' especially female and trans-masculinities as they exist within subcultures, and are appropriated within mainstream culture. In a Queer Time and Place opens with a probing analysis of the life and death of Brandon Teena, a young transgender man who was brutally murdered in small-town Nebraska. After looking at mainstream representations of the transgender body as exhibited in the media frenzy surrounding this highly visible case and the Oscar-winning film based on Brandon's story, Boys Don't Cry, Halberstam turns her attention to the cultural and artistic production of queers themselves. She examines the "transgender gaze," as rendered in small art-house films like By Hook or By Crook, as well as figurations of ambiguous embodiment in the art of Del LaGrace Volcano, Jenny Saville, Eva Hesse, Shirin Neshat, and others. She then exposes the influence of lesbian drag king cultures upon hetero-male comic films, such as Austin Powers and The Full Monty, and, finally, points to dyke subcultures as one site for the development of queer counterpublics and queer temporalities. Considering the sudden visibility of the transgender body in the early twenty-first century against the backdrop of changing conceptions of space and time, In a Queer Time and Place is the first full-length study of transgender representations in art, fiction, film, video, and music. This pioneering book offers both a jumping off point for future analysis of transgenderism and an important new way to understand cultural constructions of time and place.… (more)

Undoing gender by Judith Butler
Gender Trouble: Feminism and the Subversion of Identity (Thinking Gender Series) by Judith Butler
Trans Liberation: Beyond Pink or Blue by Leslie Feinberg
Gender Outlaw: On Men, Women, and the Rest of Us by Kate Bornstein
Epistemology of the Closet by Eve Kosofsky Sedgwick
10 more
GenderQueer : voices from beyond the sexual binary by Joan Nestle
Bodies That Matter: On the Discursive Limits of Sex by Judith Butler
Disidentifications: Queers Of Color And The Performance Of Politics (Cultural Studies of the Americas) by José Esteban Muñoz
Transgender History (Seal Studies) by Susan Stryker
Whipping girl : a transsexual woman on sexism and the scapegoating of femininity by Julia Serano
Queer Theory, Gender Theory by Riki Wilchins
From the inside out : radical gender transformation, FTM and beyond by Morty Diamond
Captive Genders: Trans Embodiment and the Prison Industrial Complex, Second Edition by Eric A. Stanley
Gender Outlaws: The Next Generation by Kate Bornstein
Assuming a Body: Transgender and Rhetorics of Materiality by Gayle Salamon
Fewer