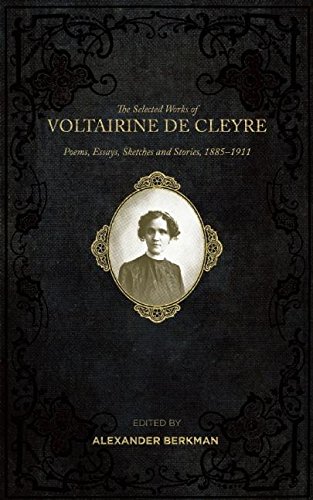 Called 'a brief comet in the anarchist firmament, blazing out quickly and soon forgotten by all but a small circle of comrades whose love and devotion persisted long after her death,' by Paul Avrich, Voltairine de Cleyre was a little-known, but crucial link in the early American anarchist milieu of the 20th century. Her gifts as a writer outshone her contemporaries and read like a breath of fresh air even today. This facsimile reprint collection of poems, essays and stories was originally published in 1914 by Emma Goldman's Mother Earth Publishing Association.

I belong only to myself : the life and writings of Leda Rafanelli by Andrea Pakieser
Taking Sides: Revolutionary Solidarity and the Poverty of Liberalism by Cindy Milstein
An American Anarchist: The Life of Voltairine de Cleyre by Paul Avrich
My Eighty-One Years of Anarchy: A Memoir by May Picqueray
Storm in My Heart: Memories from the Widow of Johann Most by Helene Minkin
3 more
A Living Spirit of Revolt: The Infrapolitics of Anarchism by Ziga Vodovnik
Joyful Militancy: Building Thriving Resistance in Toxic Times (Anarchist Interventions) by Carla Bergman
The revolution starts at home : confronting intimate violence within activist communities by Ching-In Chen
Fewer