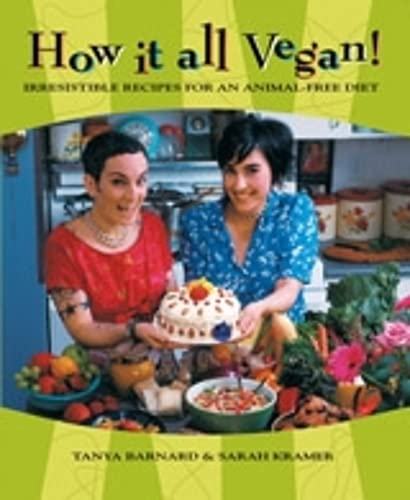 How It All Vegan!: Irresistible Recipes for an Animal-Free Diet

Sarah and Tanya are long-time friends and self-described "lazy vegetarians" whose love of animals made them want to completely eliminate animal products from their diet. Their decision to "go vegan" was a challenge not only to their palate but to their way of thinking about food and nutrition. With some imagination and a little know-how, the transition to a vegan lifestyle can be painless. And as Sarah and Tanya demonstrate in How It All Vegan!, vegan food is fabulous food, full of flavour and all the nutrients you need. Two-colour throughout, the book's chapters include entrees, soups, sauces, breads, salads, and desserts; there are recipes for blue banana muffins, mushroom barley stew, chocolate cheese-less cake, tofu jerky, and vegan versions of ice cream, mayonaisse, and Sloppy Joes. There are even instructions on turning other aspects of your life vegan: recipes for cosmetics, hair products, pet treats, and household cleaners. With its campy '50s style illustrations, unusual concoctions, and cool, punky sensibility, How It All Vegan! will tempt readers to animal-proof their diet and join the Vegan Empire. Currently, over 110,000 copies have been sold. Two-time winner, Veggie Award (VegNews), "Best Cookbook" Now in its 15th printing!… (more)

LibraryThing member ManDuke
Great for vegetarians just starting to dable into vegan cooking. The recipes are simple and tastey. I especially love all the different replacements for non-vegan items (i.e. eggs) and the dry herb to fresh herb measurement converter.
6 more
LibraryThing member mcglothlen
We sell pancakes made from their recipe every day at my restaurant. Totally great, fun, imaginative. Absolutely a must for vegans, in my opinion. Their free thinking ways inspire me to think way outside of the box when it comes to vegan cookery. They make vegan food not only not punitive but in many ways preferable.
LibraryThing member paisley1
Great first vegan cookbook. Lots of recipes for "omni" substitutes--sloppy joes, mac n' cheese...everything is excellent and very easy to make.
LibraryThing member barefootnikki
Great book... fun to read with yummy, simple recipes
LibraryThing member kthxy
This seems kind of disappointig up to now. I'm planning to work through it, maybe I'm just underestimating it… Too many things that don't work as they should (flax eggs. they're just as disgusting in anything you might want to use them for as the first thought on "flax eggs" suggests.), and all that soy cheese and other replacement stuff, that's not quite my style.… (more)
LibraryThing member MiaAndPatrick
This is a great cookbook eve if you aren't vegan!
LibraryThing member ontoursecretly
This cookbook completely makes me understand the average what-I'm-eating-ignorant, pig-eyeballs-shaped-like-hot-dogs-devouring, colon-clogged Meat Patriot's aversion to "hippie food." The simple fact is that most vegans can't cook, don't know good food when taste it, and are almost immoral in their earnest, manic attempts to get the handful of vegans who appreciate good food and can cook it to resignedly spoon gobs of vastly mis-proportioned recipes past our sophisticated, offended taste buds and down to our protesting stomachs, which will later not manage to convert "Better Than (insert name of dairy product here)" into nerves, sinew and tissue, but only knots of searing gas. Wonderful things can be done with Real Food—beans, rice, vegetables (God forbid), fruit, nuts, delicious breads, olive oil, the occasional soy substitute, methods of cooking from around the world, use of a simple, few ingredients instead of long lists of horrifying ones, and creative and adventurous use of the food we're given by the Earth rather than what we squeeze out of it—but this book's recipes, with very few exceptions, are either disgusting, bland, or simply don't turn out when put into practice. I wouldn't go so far as to side with the burger bunch, but much more can be learned from befriending one good vegan foodie (check for good body odor, cleanliness of feet, and a knack of knowing which curry take-out places won't make one ill) than slaving over food processors with any one of dozens of these sorts of recipe collections propped up on your kitchen counter.… (more)
Fewer