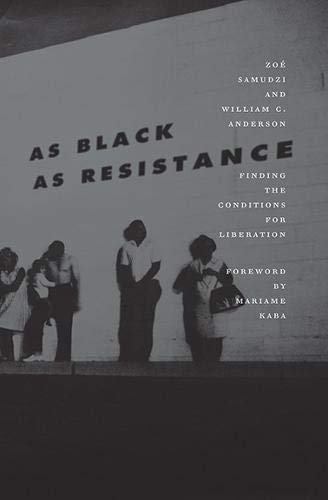 As Black as Resistance: Finding the Conditions for Liberation

In the United States, both struggles against oppression and the gains made by various movements for equality have often been led by Black people. Still, though progress has regularly been fueled by radical Black efforts, liberal politics are based on ideas and practices that impede the continued progress of Black America. Building on their original essay "The Anarchism of Blackness," Samudzi and Anderson show the centrality of anti-Blackness to the foundational violence of the United States and to the racial structures upon which it is based as a nation. Racism is not, they say, simply a product of capitalism. Rather, we must understand how anti-Blackness shaped the contours and logics of European colonialism and its many legacies, to the extent that "Blackness" and "citizenship" are exclusive categories. As Black As Resistance makes the case for a new program of self-defense and transformative politics for Black Americans, one rooted in an anarchistic framework that the authors liken to the Black experience itself. This book argues against compromise and negotiation with intolerance. It is a manifesto for everyone who is ready to continue progressing towards liberation. With a Foreword by Mariame Kaba.… (more)

As black as resistance : finding the conditions for liberation by Willian C. Anderson (Paper Book)

Turn This World Inside Out: The Emergence of Nurturance Culture by Nora Samaran
Making spaces safer : a guide to giving harassment the boot wherever you work, play, and gather by Shawna Potter
My Eighty-One Years of Anarchy: A Memoir by May Picqueray
Rebellious Mourning: The Collective Work of Grief by Cindy Milstein
Invisibility Blues: From Pop to Theory (Haymarket) by Michele Wallace
15 more
Occult Features of Anarchism: With Attention to the Conspiracy of Kings and the Conspiracy of the Peoples (KAIROS) by Erica Lagalisse
Selected works of Voltairine De Cleyre by Voltairine De Cleyre
Black Queer Hoe (BreakBeat Poets) by Britteney Black Rose Kapri
Racecraft: The Soul of Inequality in American Life by Karen E. Fields
Fat, pretty, and soon to be old : a makeover for self and society by Kimberly Dark
Feminisms in Motion: Voices for Justice, Liberation, and Transformation by Jessica Hoffmann
Joyful Militancy: Building Thriving Resistance in Toxic Times (Anarchist Interventions) by Carla Bergman
An American Anarchist: The Life of Voltairine de Cleyre by Paul Avrich
A burst of light : and other essays by Audre Lorde
Paths Toward Utopia: Graphic Explorations of Everyday Anarchism by Cindy Milstein
Re-enchanting the World: Feminism and the Politics of the Commons (KAIROS) by Silvia Federici
Decolonizing Anarchism: An Antiauthoritarian History of India's Liberation Struggle (Anarchist Interventions) by Maia Ramnath
Taking Sides: Revolutionary Solidarity and the Poverty of Liberalism by Cindy Milstein
Pleasure Activism: The Politics of Feeling Good (Emergent Strategy) by adrienne maree brown
Angels with Dirty Faces: Three Stories of Crime, Prison, and Redemption by Walidah Imarisha
Fewer