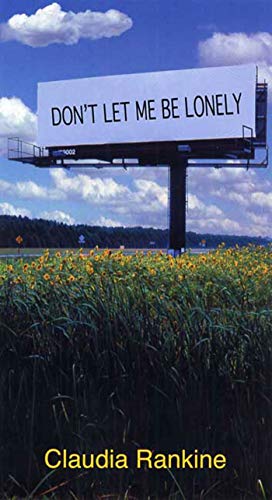 Don't let me be lonely : an American lyric

Here, available for the first time in the UK, is the book in which Claudia Rankine first developed the 'American Lyric' form which makes her Forward Prize-winning collection Citizenso distinctive- an original combination of poetry, lyric essay, photography and visual art, virtuosically deployed. Don't Let Me Be Lonelyis Rankine's meditation on the self bewildered by race riots, terrorism, medicated depression and television's ubiquitous influence. Written during George W. Bush's presidency in an America still reeling from the 9/11 attacks and charging headlong into war in Iraq, this is an early 21st-century work of great wit, intelligence and depth of feeling, with urgent lessons for the present.

LibraryThing member whitewavedarling
This is a short but fascinating work of poetry and prose that works with issues of identity, depression, media and representation, and self-definition. Comical at times, heartbreaking at others, Rankine's work here is a cross-genre look at the individual as alienated from society by the absurdity of life, death, and media. Readers should be aware that the first few sections are extremely serious--perhaps to the extent of being off-putting--but that the issues that figure heavily in the beginning, including terminal illness, are less central as the text moves forward.

For anyone interested in cross-genre work, this is a must read, but it's also simply an interesting text filled with beautiful language that lingers somewhere between philosophy and narrative, poetry and prose, in a form that makes it both accessable and memorable for perhaps any reader. If you're in a contemplative mood, or looking for a short work to while away an afternoon with, I'd recommend this, though it's meditations on life and death are, in a way, desperately earnest, and at times difficult to take. Still, it's a worthwhile book, and beautiful when given enough time and consideration.… (more)
2 more
LibraryThing member dawnpen
Upon meeting with Rankine I fell over myself and said something dumb about Lydia Davis and that I pictured them getting a drink (or, you know, tea or something) while they were both living in the city. What I didn't tell her is that I pictured this and my being there and staring at them like some sort of crazy person and sneaking around to listen to them.… (more)
LibraryThing member JimElkins
The rating is just for the use of images: I am researching the theory and history of books written with images. (writingwithimages.com)

"Citizen" raises different issues. (The review is elsewhere on this site.) In "Don't Let Me Be Lonely" the use of images seems mnemonic, evidentiary, decorative, offhanded, generic, unformatted, and therefore almost always uninteresting. In order:

1. Mnemonic: the many images of people Rankine describes, such as Abner Louima, Johnny Cochrane, Amadou Diallo (pp. 56-57), are given as reminders.

2. Evidentiary: those images are also evidentiary, in that they point toward the fact that Rankine's entire narrative is about real politics, real history, and -- by implication -- her real reactions. But "evidentiary" might be better applied to photographs that indicate the narrative is telling a true story, for example the mammogram with the lump on p. 8.

(The mismatch between the ferocity of the text and what I think of as the marginalized use of images is echoed, incidentally, in the mismatch between the book's very extensive "Notes" section, which describes most of the book's references at length, and the book's very short "Images" section, which is less than a full page. The cases of Louima, Diallo, and others are documented in "Notes," but often the "Images" file just says "(c) John Lucas," as if there is nothing more to be asked or known about the photographs.)

3. Decorative: this seems an adequate description of some illustrations, such as the still of "The Wild Bunch" on p. 25, which doesn't illustrate the points made in the text.

4. Offhanded: for example the drawings of lips speaking on p. 40, which looks tossed-off, as if Rankine had decided she wanted an image, but not what she wanted out of the image.

5. Generic: for example the Google search bar on p. 72: it accompanies a very specific idea of what might be searched, so its generic nature isn't pertinent -- it's not clear why a reader wants to be reminded of the general idea of a Google search.

6. Unformatted: most of the images in this book seem carelessly placed on the page. Why does the text wrap around the image on p. 82, but not on p. 83? Why are the images narrower than the margins in most cases, but not in all? Why not decide those issues, especially if they might be distracting?

This list could easily be extended. But there points are all symptoms: Rankine cares desperately for her subject matter, and for her images are ornaments, additions, extras, and bits of evidence. They are rarely objects of thought. The narrative rarely needs them, rarely knows what might be done with them. They never guide the narrative. They are almost, but not quite, outside the text's imagination.

(Still there are a few interesting uses of images in the book. I especially appreciate the repetition of the chalkboard marked "THIS IS THE MOST MISERABLE IN MY LIFE," repeated four ties on pp. 17-18, accompanying a narrative about a disastrous change in the person who wrote it.)… (more)
Fewer