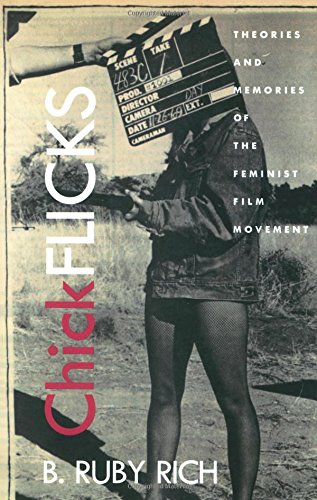 Chick Flicks : Theories and Memories of the Feminist Film Movement

by B. Ruby Rich

If there was a moment during the sixties, seventies, or eighties that changed the history of the women's film movement, B. Ruby Rich was there. Part journalistic chronicle, part memoir, and 100% pure cultural historical odyssey, Chick Flicks--with its definitive, the-way-it-was collection of essays--captures the birth and growth of feminist film as no other book has done. For over three decades Rich has been one of the most important voices in feminist film criticism. Her presence at film festivals (such as Sundance, where she is a member of the selection committee), her film reviews in the Village Voice, Elle, Out, and the Advocate, and her commentaries on the public radio program "The World" have secured her a place as a central figure in the remarkable history of what she deems "cinefeminism." In the hope that a new generation of feminist film culture might be revitalized by reclaiming its own history, Rich introduces each essay with an autobiographical prologue that describes the intellectual, political, and personal moments from which the work arose. Travel, softball, sex, and voodoo all somehow fit into a book that includes classic Rich articles covering such topics as the antiporn movement, the films of Yvonne Rainer, a Julie Christie visit to Washington, and the historically evocative film Maedchen in Uniform. The result is a volume that traces the development not only of women's involvement in cinema but of one of its key players as well. The first book-length work from Rich--whose stature and influence in the world of film criticism and theory continue to grow--Chick Flicks exposes unexplored routes and forgotten byways of a past that's recent enough to be remembered and far away enough to be memorable.… (more)

Chick Flicks : Theories and Memories of the Feminist Film Movement by B. Ruby Rich (Paperback)

From Reverence to Rape. The Treatment of Women in the Movies. by Molly Haskell
The Woman at the Keyhole: Feminism and Women's Cinema (Theories of Representation and Difference) by Judith Mayne
Visual and Other Pleasures (Theories of Represen) by Laura Mulvey
Women's Pictures: Feminism and Cinema by Annette Kuhn
Questions of third cinema by Jim Pines
6 more
Alice Doesn't: Feminism, Semiotics, Cinema by Teresa De Lauretis
The Legend of Maya Deren, Vol 1 Part 1: Signatures (1917-1942) by Veve A. Clark
The Women Who Knew Too Much: Hitchcock and Feminist Theory by Tania Modleski
Women & Film by E. Ann Kaplan
Aftershocks of the New: Feminism and Film History by Patrice Petro
The haunted screen; expressionism in the German cinema and the influence of Max Reinhardt by Lotte H. Eisner
Fewer