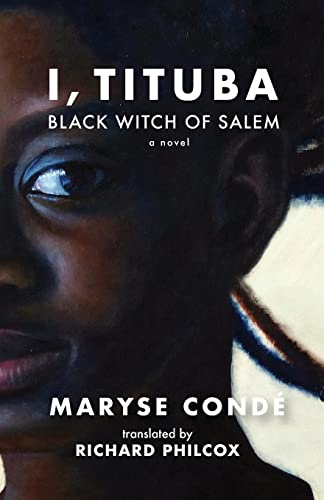 I, Tituba, Black Witch of Salem (CARAF Books: Caribbean and African Literature translated from the French)

This wild and entertaining novel expands on the true story of the West Indian slave Tituba, who was accused of witchcraft in Salem, Massachusetts, arrested in 1692, and forgotten in jail until the general amnesty for witches two years later. Maryse Condé brings Tituba out of historical silence and creates for her a fictional childhood, adolescence, and old age. She turns her into what she calls "a sort of female hero, an epic heroine, like the legendary 'Nanny of the maroons,'" who, schooled in the sorcery and magical ritual of obeah, is arrested for healing members of the family that owns her. CARAF Books:Caribbean and African Literature Translated from French This book has been supported by a grant from the National Endowment for the Humanities, an independent federal agencY.… (more)

LibraryThing member fig2
A naive and loving slave finds herself on the receiving end of a charge of witchcraft. This novel, based on actual events, stuns as the web around Tituba slowly closes. In seventeenth century Salem, Mass., being female is risky business. A great read.
1 more
LibraryThing member banjo123
This is Conde’s imagining of Tituba’s story. I became interested in reading this book after reading [The Crucible] last year. Tituba was the slave belonging to Samuel Parris who was one of the first to be accused of practicing witchcraft during the Salem witch trials. Usually, that story is told from the point of view of the Puritans. Conde tells the story from the point of view of Tituba, a slave from Barbados with strong ties to Africa.

This book was written in 1986, and the edition I read was translated by Richard Philcox and published in 1992 with an introduction by Angela Davis. Conde imagines Tituba as a mythic, not always realistic, character, and tells a story of sexual and racial oppression that stretches across continents.

I really liked this book. One strong point was the continuity of identity between Africa, the Caribbean, and the US. The book does have some weaknesses. In the afterward, Conde explains that s/he meant the book to have “mock-epic’ qualities. This isn’t entirely clear in the reading, so one is apt to take Tituba’s character as more serious and realistic than Conde intended.… (more)
Fewer