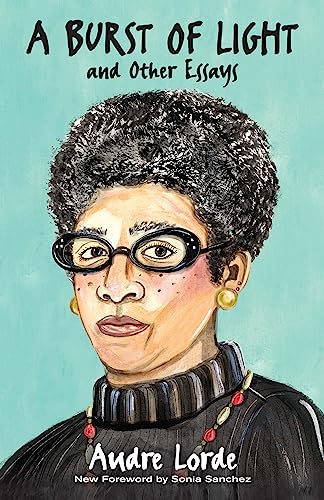 A Burst of Light: and Other Essays

""The self-described black feminist lesbian mother poet used a mixture of prose, theory, poetry, and experience to interrogate oppressions and uplift marginalized communities. She was one of the first black feminists to target heteronormativity, and to encourage black feminists to expand their understanding of erotic pleasure. She amplified anti-oppression, even as breast cancer ravaged her ailing body." -- Evette Dionne, Bustle Magazine Winner of the 1988 Before Columbus Foundation National Book Award, this path-breaking collection of essays is a clarion call to build communities that nurture our spirit. Lorde announces the need for a radical politics of intersectionality while struggling to maintain her own faith as she wages a battle against liver cancer. From reflections on her struggle with the disease to thoughts on lesbian sexuality and African-American identity in a straight white man's world, Lorde's voice remains enduringly relevant in today's political landscape. Those who practice and encourage social justice activism frequently quote her exhortation, "Caring for myself is not self-indulgence, it is self-preservation, and that is an act of political warfare." In addition to the journal entries of "A Burst of Light: Living with Cancer," this edition includes an interview, "Sadomasochism: Not About Condemnation," and three essays, "I Am Your Sister: Black Women Organizing Across Sexualities," "Apartheid U.S.A.," and "Turning the Beat Around: Lesbian Parenting 1986," as well as a new Foreword by Sonia Sanchez. "When I don't know what to do, I turn to the Lorde." -- Alexis Pauline Gumbs, Bitch Media"-- "Moving, incisive, and enduringly relevant writings by the African-American poet and feminist include her thoughts on the radical implications of self-love, living with cancer as well as essays on racism, lesbian culture, and political activism"--… (more)

Publishers' Weekly
In 1984, feminist poet Lorde learned that her breast cancer had metastasized to the liver. The moving title section comprises a series of journal excerpts that both frighten and inspire: choosing not to have a biopsy, she instead treats the disease with a stay at the homeopathic Lukas Klinik in Switzerland, consultations with more traditional medical specialists and alternatives like self-hypnosis. Her lifelong battle against racism, sexism and homophobia has armed her with the resilience to resist cancer, and thus ""A Burst of Light'' becomes not only a chronicle of Lorde's fight against disease, but a view of one woman's sparring with injustice, whether the oppressors are the South African police, the American government or malignant cells within her own body. Although it rings out with passion, anger and hope, the lengthy title piece is sometimes rambling and repetitive. In refreshing contrast, three outstanding essays on black lesbianism, the parallels between South Africa and the United States, and lesbian parenting are politically specific and pithy.
— 1 more
Publishers' Weekly

A burst of light : and other essays by Audre Lorde (Paper Book)

A burst of light : essays by Audre Lorde
The Collected Poems of Audre Lorde by Audre Lorde
The Straight Mind: And Other Essays by Monique Wittig
Thick: And Other Essays by Tressie McMillan Cottom
Hood Feminism: Notes from the Women That a Movement Forgot by Mikki Kendall
17 more
Sister Outsider: Essays and Speeches (Crossing Press Feminist Series) by Audre Lorde
The Cancer Journals: Special Edition by Audre Lorde
Zami, a new spelling of my name by Audre Lorde
Your Silence Will Not Protect You: Essays and Poems by Audre Lorde
When They Call You a Terrorist: A Black Lives Matter Memoir by Patrisse Khan-Cullors
Well, that escalated quickly : memoirs and mistakes of an accidental activist by Franchesca Ramsey
Lesbian studies : present and future by Margaret Cruikshank
Pleasure Activism: The Politics of Feeling Good (Emergent Strategy) by adrienne maree brown
This Will Be My Undoing: Living at the Intersection of Black, Female, and Feminist in (White) America by Morgan Jerkins
Electric Arches by Eve L. Ewing
The politics of reality : essays in feminist theory by Marilyn Frye
How we get free : black feminism and the Combahee River Collective by Keeanga-Yamahtta Taylor
Coming to Power; by Samois members
Dear Ijeawele, or, A feminist manifesto in fifteen suggestions by Chimamanda Ngozi Adichie
How to Be Less Stupid About Race: On Racism, White Supremacy, and the Racial Divide by Crystal Marie Fleming
The Source of Self-Regard: Selected Essays, Speeches, and Meditations by Toni Morrison
Emergent strategy by Adrienne M. Brown
Fewer