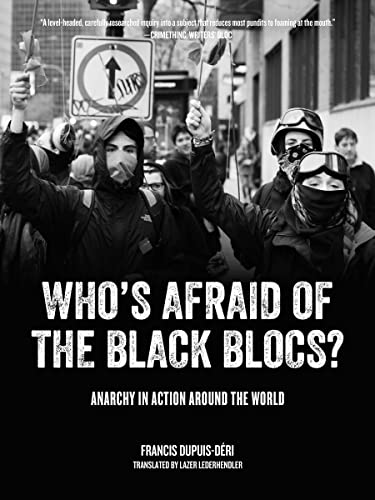 Who's Afraid of the Black Blocs?: Anarchy in Action around the World

Faces masked, dressed in black, and forcefully attacking the symbols of capitalism, Black Blocs have been transformed into an antiglobalization media spectacle. But the popular image of the window-smashing thug hides a complex reality. Francis Dupuis-Dri outlines the origin of this international phenomenon, its dynamics, and its goals, arguing that the use of violence always takes place in an ethical and strategic context. This text has been translated into English for the first time and is completely revised and updated to include the most recent Black Bloc actions at protests in Greece, Germany, Canada, and England, and its role in the Occupy movement and the Quebec student strike. It lays out a comprehensive view of the Black Bloc tactic and locates it within the anarchist tradition of direct action.… (more)

The city is ours : squatting and autonomous movements in Europe from the 1970s to the present by Bart Van der Steen
We do not fear anarchy, we invoke it : the First International and the origins of the anarchist movement by Robert Graham
Taking Sides: Revolutionary Solidarity and the Poverty of Liberalism by Cindy Milstein
Queering anarchism : addressing and undressing power and desire by Deric Shannon
Malatesta : his life & ideas by Errico Malatesta
9 more
Anarchists Against the Wall: Direct Action and Solidarity with the Palestinian Popular Struggle (Anarchist Interventions) by Uri Gordon
Reinventing anarchy, again by Howard J. Ehrlich
A small key can open a large door : the Rojava revolution by Strangers in a Tangled Wilderness
Anarchism and Its Aspirations by Cindy Milstein
Anarchy in action by Colin Ward
Moments of excess : movements, protest and everyday life by The Free Association
Anarchy works : examples of anarchist ideas in practice by Peter Gelderloos
The accumulation of freedom : writings on anarchist economics by Deric Shannon
Anarchism and education : a philosophical perspective by Judith Suissa
Fewer