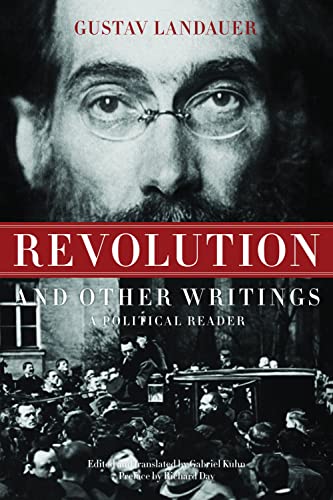 Revolution and other writings : a political reader

The first comprehensive collection of Gustav Landauers writings in English, this valuable addition to the history of anarchism in the early 20th century gathers more than 40 influential works by one of Germanys most prominent radical agitators. The readings presented here cover Landauers entire political biography, from his early anarchism of the 1890s and his philosophical reflections at the turn of the century to the subsequent establishment of the Socialist Bund and his tireless agitation against the coming Great War. Additional chapters on war and nationalism, the United States and Mexico, and opinion pieces and personal letters reveal the further scope of Landauers thinking with pieces on corporate capital, education, language, and Judaism.… (more)

We are an image from the future : the Greek revolt of December 2008 by A. G. Schwarz
Anarchism and education : a philosophical perspective by Judith Suissa
Anarchism and Its Aspirations by Cindy Milstein
Decolonizing anarchism : an antiauthoritarian history of India's liberation struggle by Maia Ramnath
Anarchy alive! : anti-authoritarian politics from practice to theory by Uri Gordon
7 more
The anarchist turn by Jacob Blumenfeld
Anarchy in the Age of Dinosaurs by Curious George Brigade
Sober living for the revolution : hardcore punk, straight edge, and radical politics by Gabriel Kuhn
The accumulation of freedom : writings on anarchist economics by Deric Shannon
Post-anarchism : a reader by Duane Rousselle
Anarchy in action by Colin Ward
Anarchy works : examples of anarchist ideas in practice by Peter Gelderloos
Fewer