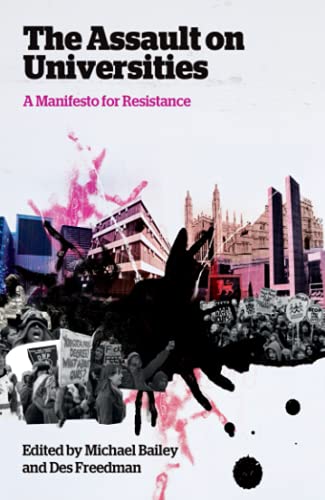 The assault on universities : a manifesto for resistance

With funding cuts well under way and many institutions already promising to charge the maximum 9,000 pounds yearly tuition fee, university education for the majority is under threat. This book exposes the true motives behind the government's programme and provides the analytical tools to fight it.Widespread student protests and occupations, often supported by staff, unions and society at large, show the public's opposition to funding cuts and fee increases. The contributors to this sharp, well-written collection, many of whom are active participants in the anti-cuts movement, outline what's at stake and why it matters. They argue that university education is becoming increasingly skewed towards vocational degrees, which devalues the arts and social sciences - subjects that allow creativity and political inquiry to flourish.Released at the beginning of the new academic year, this book will be at the heart of debates around the future of higher education in the UK and beyond, inspiring both new and seasoned activists in the fight for the soul of our universities.… (more)