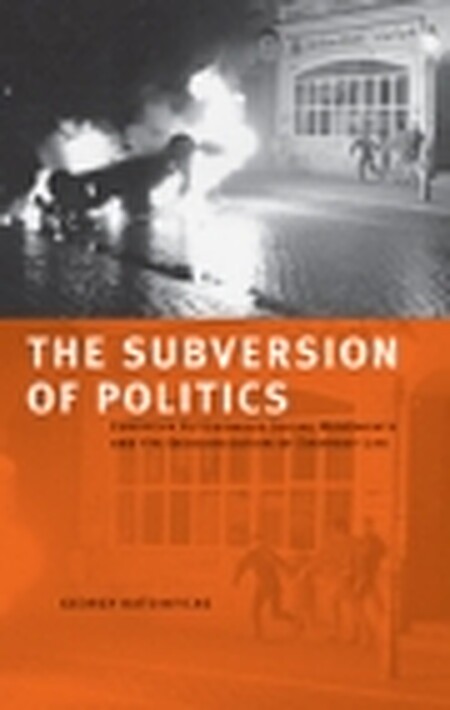 The subversion of politics : european autonomous social movements and the decolonization of everyday life

Since the modern anti-globalisation movement kicked off with the 1999 WTO protests in Seattle, a new generation has been engaging in anti-capitalist direct action. Its aims, politics, lifestyles and tactics grow directly out of the autonomous social movements that emerged in Europe from the 1970s through to the mid-1990s. The Subversion of Politics fills in the gaps between the momentous events of 1968 and 1999. Katsiaficas presents the protagonists of social revolt - Italian feminists, squatters, disarmament, punk rockers and street fighters in sympathetic light.

LibraryThing member magonistarevolt
Delving into movement theory, philosophy, and cultural criticism as well as providing a case study in autonomous politics in post-industrial Europe, Georgy Katsiaficas has written a book very important to emerging movements in the 21st century. This book will be especially helpful to those new activists who seem confused about why leftist activity seemed to disappear after 1968: it didn't. Katsiaficas excoriates the models of Marxist Leninism, criticises the New Left for self-marginalizing into covert guerilla action, and embraces the autonomous movements of Western Europe from the late 70s to today. He doesn't shy away from pointing out the movements' weaknesses, its eccentricities as well as outright alienating factors, but finds their models of resistance to be among the more promising breakthroughs in resistance to capitalism, imperialism, and the state.

Marxist-Leninists are portrayed as stodgy and prudish across Europe, often discouraging the working class from self organization, and making themselves arbiters between classes or between movements and the state. When pressed for opinions on the emerging squatting movements in Italy, they declared “[real:] workers don't break the law.” Essentializing working class students as workers and pushing studies of production and economics, they often directed young working class students away from their interest in culture and feminism. Their stale “revolution” was dowdy and full of antiquated modernist thinking, preaching uniformity and the “new” ideas of a century before. Katsiaficas blames the death of the New Left era in countries like the United States in part on the ill-fitting adoption of Leninist revolutionary forms: Maoism and Guevarism. In contrast, the continuing revolutionary movements in West Germany after the New Left era could be attributed to East Germany, which "provided ample daily evidence of the bankruptcy" (215) of past revolutionary movements.

Katsiaficas offers another interesting criticism of New Left movements: the repression and escalation of violence that distilled mass movements into the armed revolt of the Weather Underground, the Red Army Faction, and others is self defeating. Popular movements that once brought hundreds of thousands into the fold against the state and capitalism are rendered impotent by guerilla actions. Past participants become sidelined into spectators, whose support wanes, enabling the state to crush the movements with impugnity. The "bitterness of confrontation" (116) cannot become the primary focus of a popular movement. Secrecy cuts a movement off from its own constituents: as fewer people are intimately involved in the movement's processes, they have less invested in the movement. The guerillas dwindle from hundreds to tens, and then to nothing. Autonomous at their best, in contrast, do not engage in the pissing match of attacking the state where it is strongest, but undermine its legitimacy and popular support while building new structures that would replace it.

Autonomous movements are post-modern: influenced heavily by the revolutionary intercommunalism of the Black Panther Party - a world in which many worlds can exist, beyond the concepts of nation-state - and the feminist tendencies to use personal statements - not “for the workers” - and focus on everyday needs, autonomous movements strive to create asylum from some of the horrors of late stage post-Fordist capitalism. Though they are not wedded to any specific ideology, Katsiaficas attempts to construct a politic from the autonomists’ actions. Autonomists work with marginalized communities where they live, and as an international movement, attack local manifestations of international institutions in solidarity with other movements across the globe. Autonomists are integral to the struggles against politically and environmentally disastrous projects in their locale.

But Katsiaficas is especially impressed with the how autonomous movements prefigure their struggles with the decolonization of every day life. Capitalism in this post-modern era turns "love into sex, [...:]sex into pornography. Labor becomes production, production a job; free time [...:] into leisure, leisure into vacation; desire [...:] morphed into consumerism, fantasy into mediated spectacle." (221) Essentially, in this era, the front line is everywhere. The author finds the autonomous movements fairly exemplary in fostering decolonization of every day life: creating space for people to live and experiment with other ways of living outside of the aforementioned capitalist tendencies. Franz Fanon’s post-colonial writing tells us that we will have to decolonize ourselves even as the colonies of empire fall, so as to prefigure the new humanity we want to create.

Autonomous movements are not exempt from Katsiaficas' criticism, however. He is quick to point out the self-marginalization within the autonomous movement that severely detracts from its effectiveness: infantile actions that serve only one's conscience, little care within anti-imperialist politics for the popular support of their own societies, and self-righteous rejection of other forms of resistance that inhibits the successes of both their movement and the Green electoral movement that share a common origin. Katsiaficas seems convinced, however, that the worst of the autonomous movements is not where they have taken their practices too far, but where the vestiges of old social relations and values show themselves.

Katsiaficas uses this case study not to romanticize the experience of the autonomists, but to point out the necessities of moving forwards. We can look to movements of the past to know what works and what to avoid. A successful movement cannot fetishize one human activity over all others (Marxists with production, or punks with culture) but must embrace all facets of human activity. A successful movement cannot fetishize one tactic over all others (nonviolent arrogance in the German Green Party, militant resistance of the autonomists, or armed struggle of guerilla groups) but must embrace all tactics that are effective and encourage mass participation. A successful movement cannot fetishize one oppression over all others (class oppression, patriarchy, white supremacy), but must understand the intersections of oppression and how the struggle against oppression can bring us together as a species. Capitalism of the post-modern era requires a totalist view that embraces the participation of all in order to overthrow it (or outgrow it). Because past movements have attempted to ignore them, the struggle to subvert patriarchy must be integral, as well as the struggle against white supremacy and the struggle against environmental devastation. The freedom of all to create their own lives is paramount. The movement requires feminism, intercommunalism, biocentrism, and, crucially, immediatism. We need tangible institutions that can transform our everyday lives and liberate public space in the here and now. These are the lessons we can take from the autonomous movements.

The popular narrative that social movements began and ended in the 1960s is something we should be actively undermining. Of course there were significant moments in the 1960s. But social movements in the 70s, 80s, and 90s all made significant impacts of their own, and deserve their recognition as well. This book is one of many that can help you fill in the blank spots on your movement history timeline.… (more)

Realizing the impossible : art against authority by Josh MacPhee
We are an image from the future : the Greek revolt of December 2008 by A. G. Schwarz
The modern school movement : anarchism and education in the United States by Paul Avrich
Free women of Spain : anarchism and the struggle for the emancipation of women by Martha A. Ackelsberg
Anarchy in action by Colin Ward
2 more
Malatesta : his life & ideas by Errico Malatesta
Granny Made Me an Anarchist by Stuart Christie
Fewer