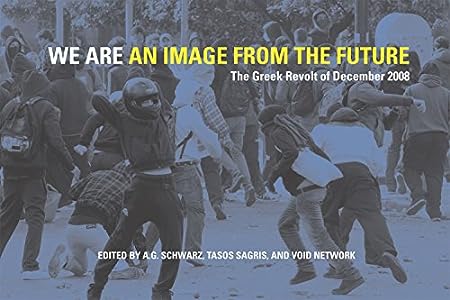 We are an image from the future : the Greek revolt of December 2008

On December 6, 2008, the city of Athens exploded as people took to the streets to demonstrate their rage over the murder of fifteen-year-old Alexis Grigoropoulos, bringing business as usual to a screeching, burning halt for three breathtaking weeks. This is the first book to delve into the Greek December and its aftermath, in the words of those who witnessed and participated in it. Interviews and personal reflections run alongside the communiqués and texts that circulated through the networks of revolt, shedding much-needed light--and dispelling destructive myths--on the real fabric of the Greek Left that made December possible.

Revolution and other writings : a political reader by Gustav Landauer
Anarchism and Its Aspirations by Cindy Milstein
Everywhere all the time : a new deschooling reader by Matt Hern
The orgasms of history : 3000 years of spontaneous insurrection by Yves Fremion
Free women of Spain : anarchism and the struggle for the emancipation of women by Martha A. Ackelsberg
9 more
Possibilities : essays on hierarchy, rebellion, and desire by David Graeber
Decolonizing anarchism : an antiauthoritarian history of India's liberation struggle by Maia Ramnath
Anarchist organisation : the history of the F.A.I. by Juan Gómez Casas
Free comrades : anarchism and homosexuality in the United States, 1895-1917 by Terence S. Kissack
Anarchy alive! : anti-authoritarian politics from practice to theory by Uri Gordon
Moments of excess : movements, protest and everyday life by The Free Association
Anarchy in the Age of Dinosaurs by Curious George Brigade
Work: Capitalism. Economics. Resistance by CrimethInc.
Another politics : talking across today's transformative movements by Chris Dixon
Fewer