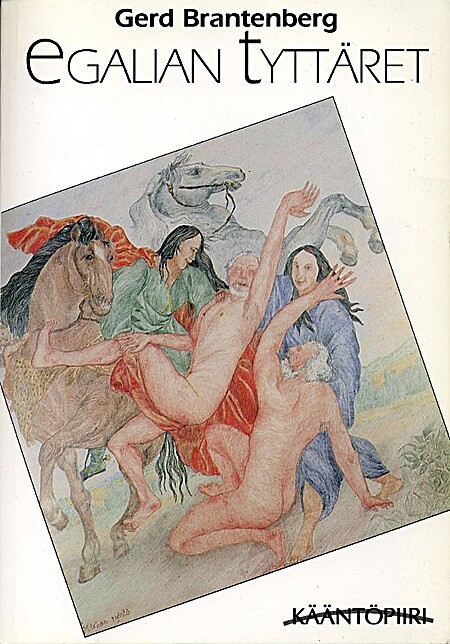 Welcome to the land of Egalia, where gender roles are topsy-turvy as "wim" wield the power and "menwim" light the home fires. This re-telling of the prototypical coming-of age novel will have readers laughing out loud and wondering who should prevail: poor Petronius, who wants more than anything to cruise the oceans as a seawom; or his powerful and protective mother Director Bram, who rules her family with an authoritarian righteousness. But for better or for worse, as the masculist party begins to organize and protest, the landscape of Egalia threatens to change forever. More than just a humorous romp, Egalia's Daughters poses the provocative question of whether the culprit in gender subjugation is gender itself or power-no matter who wields it.… (more)

LibraryThing member Citizenjoyce
Here's a little delicious tid bit from Egalia's Daughters in which wim are the dominant sex and poor housebound menwim stay home to care for the children and mop the floors:

This description is of the annual Menstruation Games:

At the front were two big, dark red banners, symbolizing menstrual blood, then came the musicians - a band composed of twenty pregnant wim playing a victory march, followed by a troop of fifteen more wim waving blood towels of various colours, throwing them up into the air and catching them, juggling with them -- at least five at once -- in time with the music. At the tail end came the menwim, with children in their arms or holding them by the hand. When the pregnant brass-players had finished their march, the menwim began singing the 'Hymn to the Life-force', which was about the pregnant daughters of the motherland.

Now, Egalia is not an egalitarian state, and the menwim are oppressed, but damn, the wim know how to celebrate being wim! Brantenberg takes on sexism by examining all the ways men, or rather menwim, would be discriminated against if women, or wim, were the dominant gender. She examines everything from the idea of which human characteristics "naturally" belong to which gender, to how language shapes our view of the world, to sexualizing clothing to the idea that one gender is "used" by the other for sex in such a way that one gender cannot think of the other without thinking of sex, to the idea that if a gender decides to stand up for its rights the people in the movement are thought to be haters of the other gender and homosexual so easily ignored. All these arguments would work either way, depending on which gender is being discriminated against. What is different in this book is that in a matriarchy, female (or rather fele) domination is based on the dominant sex's affiliation with the natural world based on the ability to menstruate. Because of this affinity environmentalism is natural and governmentally protected. Women are with nature as opposed to the patriarchal idea of men fighting against nature. This is an excellent book recommended to anyone interested in feminism, humanism or environmentalism.… (more)
2 more
LibraryThing member mochap
fascinating take on gender politics and sexism. Written in the 70s, but still relevant today. challenges your ability to step outside of our cultural norms. Very cool
LibraryThing member krazykiwi
Menwim can't wear trousers, there wouldn't be room in there for their penises and shamebags!

Cleaning in the kitchen, we have this one shelf that tends to accumulate... stuff. And on it, I found my copy of this book, and realised I'd never reviewed it. I also realised, bye-the-bye, that to have got on that shelf, my daughter must have had it in the kitchen, which somehow makes me quite proud, because this is not obviously a book a 15 year old girl would pick up, but it is one that perhaps more should read.

The plot is simple, almost non-existent, although pleasant enough. A coming of age story, a young man making forays into the adult world, finding out it's not all a bed of roses, and just "being a grown-up" doesn't mean you get what you want. The plot is not the point though.

What Brantenberg did, is simply flip the genders. On absolutely everything. Every place in our language, clothing, rituals, societal makeup, everywhere. I imagine she wrote a simple story about a young woman learning about feminism in the 70's, and then simply reversed everything, and therein lies the satire.

Instead of men and women, we have wim, and manwim. Adolescent boys are taken on excruciating expeditions with their stay-at-home-dad's to the mall to buy their first peho's, and then complain how stupid and uncomfortable it is to have to cram their penises into those stupid boxes. The symbols of sporting prowess are the symbols of menstruation, not masculinity.

The genius is that the author more or less doesn't comment on most of it, it just is what it is. And there's a lot of things that are so utterly invisible to us most of the time, but are cringe-worthy when they have a light shone on them in this way.

The only real reason to not read this, is that the language can be a little difficult. I'm not exactly a feminist scholar, there's probably a lot more to say about this than I can manage. But I do think this is something that is very worth picking up if you run across a copy. As an adult woman, old enough to remember the time depicted here, even for me the depth of impact gender has on language was illuminating in itself. The writing is otherwise clear enough that you get the hang of the reversal within a chapter or two. I say that having read it in Swedish, which like the author's native Norwegian, has neutral gender pronouns available which to some extent mute the effect of biological sex. Reading it again in English made the whole thing even stronger.

You may not precisely enjoy it (or you might, the characters are quite engaging, and there are places it's drop dead funny), but I don't think it's possible to read this book without experiencing at least a small moment of revelation.… (more)
Fewer