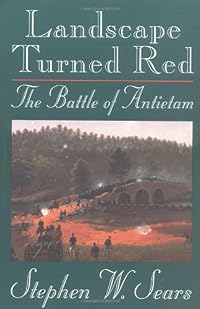 The Civil War battle waged on September 17, 1862, at Antietam Creek, Maryland, was one of the bloodiest in the nation's history. On this single day, the battle claimed nearly twenty-three thousand casualties. In Landscape Turned Red, the renowned historian Stephen Sears draws on a remarkable cache of diaries, dispatches, and letters to recreate the vivid drama of Antietam as experienced not only by its leaders but also by its soldiers, both Union and Confederate. Combining brilliant military analysis with narrative history of enormous power, Landscape Turned Red is the definitive work on this climactic and bitter struggle.

LibraryThing member Sandydog1
I knew that Antietem, the bloodiest day of the American Civil War was a total cluster. But reading the details, with heavy emphasis on the Union side, was fascinating. No recon, no communication, egotistical leadership, timidity, and procrastination all combined on the Union side to grasp defeat or
Show More
at least a draw, from the mighty hand of victory. This battle, like others, could have really shortened the Civil War.

Sears has provided a meticulous account of McClellan's foibles.
Show Less
12 more
LibraryThing member Schneider
Stephen W. Sears does not need anyone to annunciate any louder the fact that he is a wonderful American Civil War author. His many works alone, including "Landscape Turned Red: The Battle of Antietam" can attest to that.
The narrative which Sears employs is constant and moving. It never seems to bog
Show More
down for too long a period. His prose keeps the reader engaged, and to use an oft-used expression: he did bring the Battle of Antietam, with all of its movements, locations, and cast of characters alive.
"Landscape Turned Red" is not a difficult book to read and understand. Mr. Sears uses language that most everyone can understand, though he did not write it aimed at catering to the lowest common denominator. It is a very well researched work. Sears seems to support his claims in the book with facts, of which there are many, but still keeps the flow of the book moving forward.
An excellent and scholarly read that I would recommend to any and all.
Show Less
LibraryThing member tbrennan1
Superb book detailing the battle of Antietam in the American Civil War. This battle was one of the bloodiest in American History and the author Stephen Sears draws on a variety of sources including diaries and letters of the participants to produce a definitive work. The book was gripping and
Show More
Mister Sears displays a mastery of his craft in the writing of this book. He is scathing in his comments on the Union Generals in particular, George McClellan who was too cautious in his handling of the Union battle deployment and who overstated the numbers of the Confederate forces in all correspondence with Washington. The importance of the battle in influencing Lincoln to issue the Emancipation Proclamation is wonderfully illustrated in this history. A wonderful addition to my library.
Show Less
LibraryThing member wildbill
This is a very good description of one of the most important battles of the Civil War. I enjoyed it much more than The Crossroads of Freedom: Antietam The battle was significant for a number of reasons. It was the victory that Lincoln was waiting for so that he could issue the preliminary
Show More
Emancipation Proclamation changing the whole character of the war and the bloodiest single day battle in American history.
I have read several other books by Stephen W. Sears and I thought that this was one of his best. The book starts with some comments on the Battle of the Seven Days and a short description of The Second Battle of Bull Run.
The drama of the battle began when Federal soldiers found a copy of Lee's detailed battle plans, Order 191, wrapped around three cigars. This gave George McClellan a terrific opportunity to destroy the Army of Northern Virginia. McClellan followed his pattern of delaying and not using all of his troops and blew his chance to end the war.
I thought that Sears made excellent use of primary sources throughout the book that made the action come alive. He writes a detailed narration of the day's fighting with insightful commentary on the mistakes made by the Northern generals. Time and time again Lee's army is pushed to the brink of destruction but McClellan fails to make the final push necessary for complete victory.
There is a very good appendix detailing exactly how Lee's orders were lost and then found. Sears points out that there is a disagreement among the sources for this part of the story and we may never know exactly what happened.
This is an excellent book for a student of the Civil War. While it is well written and dramatic tale it may not be as interesting for someone who does not have that much interest in the war.
Show Less
LibraryThing member ksmyth
I was so excited when I heard this book was to be issued in the early '80's. I waited patiently and bought it in hard cover when it was released. I was disappointed. I remembered the exciting narrative by Bruce Catton in his books on the Army of the Potomac, and Sears just didn't capture the same
Show More
fire.

Mr. Lincoln's Army by Bruce Catton
Glory Road by Bruce Catton
Gettysburg, the second day by Harry W. Pfanz
A stillness at Appomattox by Bruce Catton
Gettysburg--Culp's Hill and Cemetery Hill by Harry W. Pfanz
5 more
April 1865 : the month that saved America by Jay Winik
The Civil War : An illustrated history by Geoffrey C. Ward
The life of Johnny Reb : the common soldier of the Confederacy by Bell Irvin Wiley
Chancellorsville, 1863: The Souls of the Brave by Ernest B. Furgurson
Lincoln at Gettysburg : the words that remade America by Garry Wills
Fewer