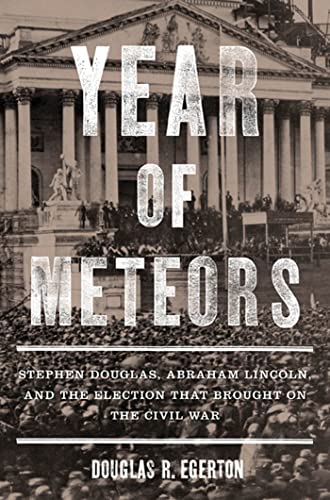 Year of meteors : Stephen Douglas, Abraham Lincoln, and the election that brought on the Civil War

"In early 1860, pundits and political operatives across America confidently predicted the victory of Illinois senator Stephen A. Douglas in the coming presidential election. Douglas, after all, led the Democrats, the only party that bridged North and South. But the Democracy would splinter over the issue of slavery, opening the way for the upstart Republicans, exclusively Northern, to steal the Oval Office. Dark horse Abraham Lincoln, not the first choice even of his own party, won the presidency with a record-low share of the popular vote. Year of Meteors re-creates the cascade of events that confounded political bosses, set North and South on the road to disunion, and put not Stephen Douglas but his livelong rival in the White House"--Cover, p. 2.… (more)

LibraryThing member nbmars
The United States presidential election of 1860 was possibly the most seminal in our history. Egerton follows the election with great care, giving the bulk of his attention to Democratic party politics. He articulates the positions of Stephen Douglas, John Breckenridge, and John Bell, and describes what happened at the various party conventions held to select these candidates.

Egerton posits several theses about the election that I believe he proves quite adequately in this book.

One is that the “fire-eating” Southerners were determined to brook no compromises; they wanted to split the Democratic party vote. Their stated goal was to get a Republican elected, so that the South would have an “excuse” to secede. The two chief engineers of this plan were the rabid secessionists William Yancey of Alabama and Robert Rhett of South Carolina. Both of them had been publicly calling for secession for years.

The second is that, in spite of what later revisionist historians claimed about the motives of Southerners, it was never about “states’ rights”; it was always about slavery. As the Vice President of the Confederate States, Alexander Stephens, declared of the new government:

"…its corner-stone rests upon the great truth that the negro is not equal to the white man; that slavery – subordination to the superior race – is his natural and normal condition.”

(It should also be noted that southern planters rejected northern offers to free blacks and then colonize them in Liberia or elsewhere so the southerners wouldn't have to deal with them. Southern "Yanceyites" had no interest in freeing blacks. In fact, they wanted more enslaved workers, not fewer, and even lobbied to get the Atlantic slave trade re-opened to “stock” the western territories.)

At the time of the 1860 election, as Egerton points out:

"[white southern planters] saw no reason to disguise their message; it would only be in later years, after the Confederacy had collapsed under northern guns, that statesmen writing their memoirs would think it necessary to point to more morally acceptable causes such as economic grievances.”

Even President Buchanan, trying to diffuse the secession crisis, made a speech in which he admonished that talk of liberty and equality by northerners could cause servile insurrections and terrify plantation mistresses in dread of what could happen to them. [No one of course was concerned about the terrified young black girls in the slave quarters, whose fears were actually based on reality. This best-ever example of projecting your worst characteristics onto your enemies was repeated over and over again in the South in the reconstruction years.] (Buchanan, who wasn’t even our worst or our most racist president, endorsed Breckinridge for president in the 1860 race because Breckinridge was the only one to favor a federal slave code for the territories, as opposed to letting the territories decide based on popular sovereignty, and thereby taking the risk that some of them would be – gasp – free.)

A third theory Egerton advances is that even had the Democratic party stayed united behind Stephen A. Douglas, Lincoln still would have won. He includes an analysis of the electoral and popular voting to support his position.

Stephen Douglas, no matter what else he might have been, was a staunch unionist, and when Lincoln won the election, he backed him all the way, meeting with him often to consult on the deteriorating national situation. In fact, they got on so well that Secretary of State Seward, who wanted to exert the most influence over Lincoln, was disturbed over “the growing intimacy between the senator and the president.” As it happened, Seward needn’t have worried. At President Lincoln’s request, Douglas undertook a mission to the Border States and to the Northwest to rouse Unionist sentiments among their citizenry, but the non-stop schedule and non-stop drinking wore him down. He died of typhoid fever on June 3, 1861, at the age of forty-eight.

Discussion: This excellent book covers only a small slice of antebellum politics, but is rich in detail. It is especially valuable for its focus on Douglas and his southern rivals rather than on Lincoln. I enjoyed it a great deal, but I wouldn’t recommend it to a reader unfamiliar with the broader context, or with the constitutional, territorial, and sectional issues that were roiling the nation.… (more)
2 more
LibraryThing member franoscar
This is a very long & detailed book. It probably isn't so long, but I read it on my phone. It is an interesting & detailed discussion about the electoral politics of 1860. There are accounts of each of the conventions, and descriptions of the main characters. Douglas is the main character, and the story is a story of redemption; of Douglas the schemer, the manipulator, the man who would give in to the slave interests again & again come to stand for the Union there at the end, and kill himself by overwork as he campaigned against disunion. The thesis is that the southern "fire-eaters" wanted disunion & secession and that they purposely broke the Democratic Party so that Lincoln would win and the South would secede. The other thesis is that the Civil War was fought over slavery; the states secedes to preserve slavery; and the idea that it was really about economic systems, or cultural differences is ludicrous. At the beginning, he says, nobody denied it, nobody pulled any punches.

Lincoln appears but not in the center. The author has a high opinion of Lincoln and gives a detailed account of his work to pull together his cabinet, and his willingness to trust and empower Hamlin.

I thought it was definitely worth reading.… (more)
LibraryThing member BrianHostad
An interesting account of the presidential race of 1860. Despite its appearance it is a fairly heavy read that crams in a lot of detail and requires concentration in order to keep on top of the narrative. Surprising really as the basic narrative is that the slavery issue was always going to end in secession.
Being British I don' t have the grip of American geography the American author assumes, so that the importance of lines and states relative position can be lost. A map of 1860 America would have been very useful. Also an appendix showing the results from the election would have been good, I went to wiki which proved very useful.… (more)
Fewer

Lincoln president-elect : Abraham Lincoln and the great secession winter 1860-1861 by Harold Holzer
Lincoln and Douglas: The Debates That Defined America by Allen C. Guelzo
Lincoln at Cooper Union: The Speech That Made Abraham Lincoln President by Harold Holzer
Copperheads: The Rise and Fall of Lincoln's Opponents in the North by Jennifer L. Weber
The Fiery Trial : Abraham Lincoln and American Slavery by Eric Foner
9 more
We Are Lincoln Men: Abraham Lincoln and His Friends by David Herbert Donald
Midnight rising : John Brown and raid that sparked the Civil War by Tony Horwitz
Henry Clay : the essential American by David Stephen Heidler
1864: Lincoln at the Gates of History by Charles Bracelen Flood
Bloody Crimes: The Chase for Jefferson Davis and the Death Pageant for Lincoln's Corpse by James L. Swanson
Lincoln's Emancipation Proclamation : The End of Slavery in America by Allen C. Guelzo
The great triumvirate : Webster, Clay, and Calhoun by Merrill D. Peterson
A country of vast designs : James K. Polk, the Mexican War, and the conquest of the American continent by Robert W. Merry
Lincoln: Speeches and Writings 1832-1858 (Library of America) by Abraham Lincoln
Fewer