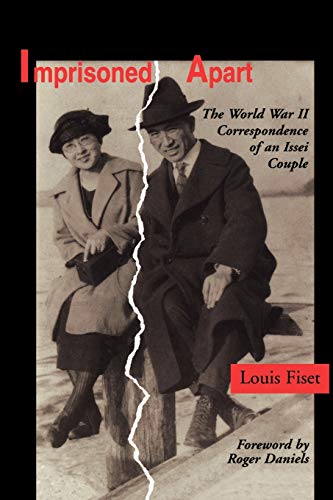 ?Please don't cry,? wrote Iwao Matsushita to his wife Hanaye, telling her he was to be interned for the duration of the war. He was imprisoned in Fort Missoula, Montana, and she was incarcerated at the Minidoka Relocation Center in southwestern Idaho. Their separation would continue for more than two years. Imprisoned Apart is the poignant story of a young teacher and his bride who came to Seattle from Japan in 1919 so that he might study English language and literature, and who stayed to make a home. On the night of December 7, 1941, the FBI knocked at the Matsushitas? door and took Iwao away, first to jail at the Seattle Immigration Stateion and then, by special train, windows sealed and guards at the doors, to Montana. He was considered an enemy alien, ?potentially dangerous to public safety,? because of his Japanese birth and professional associations. The story of Iwao Matsushita's determination to clear his name and be reunited with his wife, and of Hanaye Matsushita's growing confusion and despair, unfolds in their correspondence, presented here in full. Their cards and letters, most written in Japanese, some in English when censors insisted, provided us with the first look at life inside Fort Missoula, one of the Justice Department's wartime camp for enemy aliens. Because Iwao was fluent in both English and Japanese, his communications are always articulate, even lyrical, if restrained. Hanaye communicated briefly and awkwardly in English, more fully and openly in Japanese. Fiset presents a most affecting human story and helps us to read between the lines, to understand what was happening to this gentle, sensitive pair. Hanaye suffered the emotional torment of disruption and displacement from everything safe and familiar. Iwao, a scholarly man who, despite his imprisonment, did not falter in his committment to his adopted country, suffered the ignominity of suspicion of being disloyal. After the war, he worked as a subject specialist at the University of Washington's Far Eastern Library and served as principal of Seattle's Japanese Language School, faithful to the Japanese American community until his death in 1979.… (more)