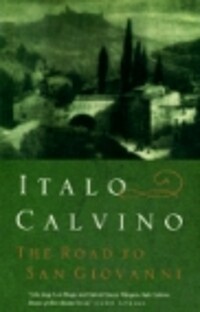 The road to San Giovanni

This is a series of five autobiographical essays by the Italian writer, Italo Calvino. The first, The Road to San Giovanni, revolves around his father and the house and town where he grew up; the second explores his childhood experience of film, notably the figure of Clark Gable; the third, his experience of war as a member of the Italian Resistance, fighting the fascists; the fourth, houses - particularly the role of the kitchen in domestic life; and the fifth, From the Opaque, is a series of philosophical thoughts about the shape of the world.

LibraryThing member Brendan.H
The title piece and "From the Opaque" seemed to be the highpoints in this collection of "memory exercises". Both do an admirable job of attempting to recreate not just memories but direct sensory experience and how it was translated into a more subjective world view of simpler, fewer, and less sharply defined objects a younger age. I'm sure it is possible to dig some hard philosophy out of these pieces, but as a casual reader the strongest impression was of an almost transcendental nostalgia.

The other three essays were less interesting to me. The piece on cinema was decent while the war time recollection felt a little too slight and the essay on the Parisian garbage can seemed a bit self-indulgent. Still, I am sure all of these essays have their fans (well, maybe not the second). I haven't read anything else by Calvino, so I don't really know whether it is representative of his work as a whole.… (more)
1 more
LibraryThing member Eoin
A beautiful collection of essays from the master fabulist. My favorite was about garbage cans. Covers Fellini through Latin plant names. Worth it.
Fewer