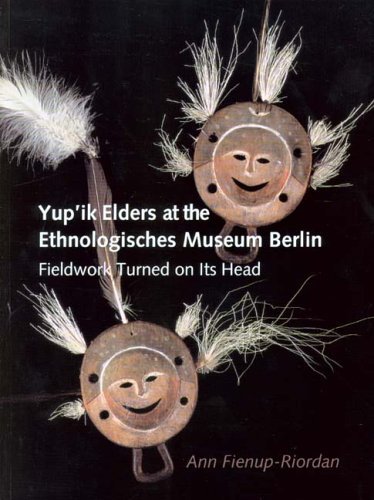 Yup'ik elders at the Ethnologisches Museum Berlin : fieldwork turned on its head

"Norwegian adventurer Johan Adrian Jacobsen collected more than two thousand Yup'ik objects during his travels in Alaska in 1882 and 1883. Now housed in the Berlin Ethnological Museum, the Jacobsen collection remains one of the earliest and largest from Alaska's Yukon-Kuskokwim Delta. When Ann Fienup-Riordan first saw the collection being unpacked in 1994, she was "stunned to find this extraordinary Yup'ik collection, with accession records still handwritten in old German script and almost completely unpublished."" "In 1997, Fienup-Riordan and Yup'ik translator Marie Meade returned to Berlin with a delegation of Yup'ik elders to study Jacobsen's collection. Yup'ik Elders at the Ethnologisches Museum Berlin recounts fourteen days during which the elders examined objects from the collection and described how they were made and used. Their descriptions, based on oral history and firsthand experience with similar objects, are imparted through songs, stories, and personal narratives. Woven together with Jacobsen's writings, technical descriptions, and accession information, the narrative presents a vast array of knowledge." "An introductory essay describes Jacobsen's life and trip to Alaska and the region as it was then and as it is today. Informal snapshots show the elders interacting with the objects and miming their use, while Barry McWayne's large color photographs make possible the "visual repatriation" of this collection. Yup'ik Elders at the Ethnologisches Museum Berlin also includes extensive notes summarizing accession information, a glossary of Yup'ik object names, and a detailed index. This is the first time a major Arctic collection has been presented from the Natives' point of view, an example of "reverse fieldwork" that can enrich understanding of Native American collections the world over."--Jacket.… (more)