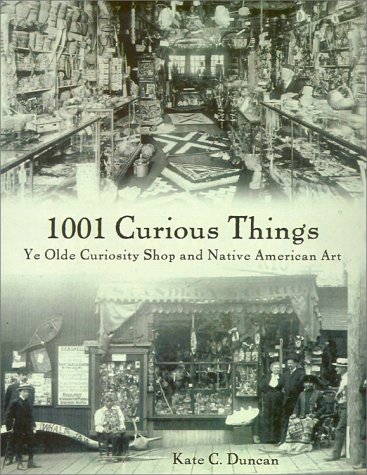 For more than one hundred years, tourists and residents alike have flocked to Ye Olde Curiosity Shop, located on Seattle's waterfront. Here a mummy nicknamed Sylvester, a collection of shrunken heads from Ecuador, a two-headed calf, and a mermaid preside over walls and cases crammed with an incredible jumble of souvenirs and trinkets, intermixed with authentic Northwest Coast and Alaskan Eskimo carvings, baskets, blankets, and other artworks. The guestbook records visits by Theodore Roosevelt, Will Rogers, Jack Dempsey, Charlie Chaplin, J. Edgar Hoover, Katherine Hepburn, John Wayne, Sylvester Stallone, and Queen Marie of Rumania, among many others. Ye Olde Curiosity Shop was founded in 1899 by Joseph E. ?Daddy? Standley, an Ohio-born curio collector who came to Seattle in the late 1890s during the Yukon gold rush. Although Native American material vied for space with exotica from all corners of the globe, it soon grew to be the mainstay of the shop, which became identified with the whalebones displayed outside and the ?piles of old Eskimo relics? within. Also to be found were baskets, moccasins, ivory carving from Alaska, Tlingit spruce root baskets, Haida ?jadeite? totem poles, masks, paddles, and other curiosities from the Northwest Coast. Indians from the Olympic Peninsula brought baskets, coming up to the back door of the shop in their canoes. Others, originally from British Columbia but now living on the flats not far from the shop, carved miniature totem poles by the hundreds and full-size poles on commission. Trading companies supplied Indian curios from the Plains, Southwest, and California. An art historian trained in the classic arts of the Northwest Coast, Kate Duncan became interested in the history of the shop when she learned that it had not only been an active participant in Seattle's 1909 Alaska-Yukon-Pacific Exposition but had also been a major source of important Northwest Coast collections in many museums, including, among others, the Royal Ontario Museum, the George G. Heye Collection (now in the Smithsonian's Museum of the American Indian), the Washington State Museum, the Newark Museum, the Portland Art Museum, and the American Museum of Natural History. Granted full access by the present owners -- grandson and great-grandson of ?Daddy? Standley -- to the remarkably complete archives maintained from the time the shop opened, Duncan has provided a fascinating chapter in the history of Seattle, especially in its early years, as well as a significant contribution to the literature on tourist arts and collecting.… (more)

Captured Heritage: The Scramble for Northwest Coast Artifacts by Douglas Cole
Looking north : art from the University of Alaska Museum by University of Alaska Museum.,
People of the river : native arts of the Oregon territory by Bill Mercer
The Box of Daylight: Northwest Coast Indian Art by Bill Holm
Painting in the North : Alaskan art in the Anchorage Museum of History and Art by Kesler Woodward
18 more
S'abadeb = The gifts : Pacific Coast Salish arts and artists by Barbara Brotherton
King County and its Queen City, Seattle : An Illustrated History by James R. Warren
Columbia River basketry : gift of the ancestors, gift of the earth by Mary Dodds Schlick
Seattle : the life and times of an American city by Gerald B. Nelson
The Spirit Within: Northwest Coast Native Art from the John H. Hauberg Collection by Steven Brown
Magnificent Obsessions : Twenty remarkable collectors in pursuit of their dreams by Mitch Tuchman
Seattle's Beacon Hill by Frederica Merrell
Seattle, now & then by Paul Dorpat
Seattle Now & Then: Volume 2 by Paul Dorpat
A Wealth of Thought: Franz Boas on Native American art by Franz Boas
Northwest coast Indian art by Erna Gunther
Pugetopolis : a mossback takes on growth addicts, weather wimps, and the myth of Seattle nice by Knute Berger
Southwestern pottery : Anasazi to Zuni by Allan Hayes
294 glimpses of historic Seattle, its neighborhoods and neighborhood businesses by Paul Dorpat
Picturing the Alaska-Yukon-Pacific Exposition : the photographs of Frank H. Nowell by Nicolette Bromberg
Seattle, past to present by Roger Sale
Susan Point : Coast Salish artist by Gary Wyatt
Trading Identities: The Souvenir in Native North American Art from the Northeast, 1700-1900 by Ruth B. Phillips
Fewer