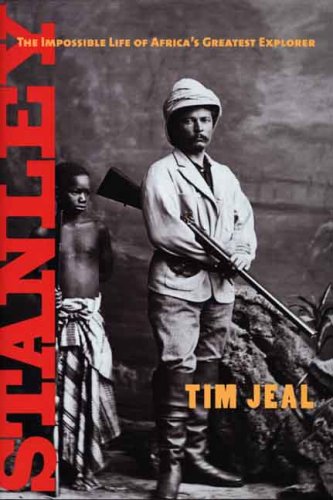 We think of Stanley as a cruel imperialist who connived with King Leopold II of Belgium in horrific crimes against the people of the Congo--and the journalist who conducted the most legendary celebrity interview in history, opening with, "Dr. Livingstone, I presume?" But these perceptions are not quite true, as biographer Jeal shows. With access to previously closed Stanley family archives, Jeal reveals the extent to which Stanley's career and life have been misunderstood and undervalued. Few have started life as disadvantaged as Stanley. Rejected by both parents and consigned to a Welsh workhouse, he emigrated to America as a penniless eighteen-year-old. Jeal re-creates Stanley's rise to success, his friendships and romantic relationships, and his life-changing decision to assume an American identity. Stanley's epic but unfairly forgotten African journeys are described, establishing the explorer as the greatest to set foot on the continent.--From publisher description.… (more)

LibraryThing member Stbalbach
Stanley is most famous for finding Livingstone, but it was a publicity stunt, his real legacy were two crossings of equatorial Africa, the first in recorded history. The popular perception of Stanley as a young upstart who finds Livingstone then turns into a brute killer and imperialist enabler, a model for the Heart of Darkness turns out to be wrong, he is more victim than victimizer, a scapegoat. Jeal does an admirable job establishing Stanley as one of the great African explorers who was unfairly maligned, in no small part due to Stanley's own insecurities from his workhouse upbringing. He wanted to appear tough and strong, and went too far in his memoirs, even when the truth was more sanguine. Of course much of this is speculation, other authors might speculate differently, but Jeal had access to a trove of newly available primary source materials. And Jeal is no hagiographer, as his biography of Livingstone can attest, so his opinion is credible. The third major expedition Stanley took, the rescue of Emin Pasha, is about as Apocalypse Now as it gets for Victorian explorers. They went deep up the Congo, then up another major river into a thousand mile forest full of headhunters, columns got separated and people went insane committing brutish atrocities. Documented in Stanley's In Darkest Africa and later adapted to the 1978 play The Rear Column (dir. Harold Pinter).… (more)
4 more
LibraryThing member cornerhouse
Written with access to a wealth of new documentary material, Jeal goes a long way toward rehabilitating Stanley's clearly erroneous reputation for bloodthirsty conquest, etc. Even so, Stanley is not a terrifically sympathetic character, as ambitious as he was. If anything, this biography is a case study in why it's better in the end to tell the truth, instead of having to weave one tissue of lies to cover another tissue of lies.… (more)
LibraryThing member atheist_goat
I liked this, though I quickly grew to dislike Jeal and his constant refrain of "no one else has ever used these materials or drawn these conclusions - everyone else has always been wrong about Stanley and I alone am right!" He wrote a biography of Livingstone in which I gather he claimed to be the only person ever who didn't think Livingstone was an angel, and in this he claims to be the only person ever who didn't think Stanley was a devil. It is a very good biography when the biographer keeps his ego out of it, which he sometimes manages to do for twenty pages at a time.… (more)
LibraryThing member nmele
An interesting biography of the journalist and explorer which introduces evidence from Stanley's diaries and letters to counter the prevailing image of him as a brutal opportunist who colluded with Belgium's King Leopold in ruthlessly exploiting the people and resources of the Congo basin. I was most impressed by the accounts of Stanley's trans-African journeys, which were quite amazing.… (more)
LibraryThing member JBGUSA
PLodding. Parts great but more than I ever wanted to know about his sex life.
Fewer

The Blue Nile by Alan Moorehead
A rage to live : a biography of Richard and Isabel Burton by Mary S. Lovell
The scramble for Africa : white man's conquest of the dark continent from 1876-1912 by Thomas Pakenham
Young Stalin by Simon Sebag Montefiore
Dark safari : the life behind the legend of Henry Morton Stanley by John Bierman
5 more
To the heart of the Nile : Lady Florence Baker and the exploration of Central Africa by Pat Shipman
The return of a king : the battle for Afghanistan, 1839-42 by William Dalrymple
Captain Sir Richard Francis Burton : the secret agent who made the pilgrimage to Mecca, discovered the Kama Sutra, and brought the Arabian nights to the West by Edward Rice
The great game : the struggle for empire in central Asia by Peter Hopkirk
Shadow of the Silk Road by Colin Thubron
Fewer