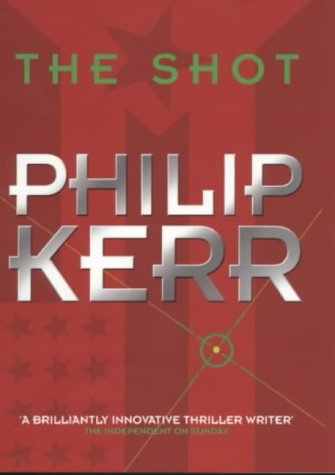 As President Jack Kennedy takes power, the mob decides to succeed where the CIA has failed and take out Fidel Castro. They dispatch a hit man, but it soon turns out that he has his own agenda and target - the President. But is the hitman operating alone, or does someone else want Kennedy dead?

LibraryThing member John
This is nothing if not convoluted: Tom Jefferson is a professional assassin who specializes in long-distance sniper-type executions, but is not averse to getting his hands dirty at close quarters; he is hired by mafia figures in the US (in cahoots with the CIA) to assess the feasibility of shooting Castro, but unknown to either employer, his sympathies lie with the Cuban revolution and he is double-timing them to the Cuban secret police; he takes a substantial downpayment for the murder, but then disappears when his wife is murdered and the mafia types, still not knowing his true allegiances, figure out that he is going to shoot John Kennedy, the President-elect, so they gear-up their substantial resources to find and stop him because, having delivered the election to Kennedy, they believe that he will go easy on the investigation of organized crime and work with them on an invasion of Cuba to overthrow Castro; they hire a retired FBI tough-guy named Nimmo who does some spiffy investigative work to find Jefferson who has done an excellent job of covering his tracks; meanwhile, Jefferson is proceeding with his planning for a shot at Kennedy when he visits Harvard, and in this, he is assisted by Alex Goldman, a current FBI guy who spearheads the outing of communists and is an all-round shit-disturber, but who is also working for Cuban intelligence. The whole thing builds to an interesting climax and conclusion. A decent thriller and a quick read, but not as good as Kerr's Berlin Noir trilogy, maybe because the mafia/FBI/CIA/political connections seem too familiar and lack the atmosphere that Kerr produced so well in wartime Berlin and post-war Vienna.
(Dec/00)… (more)
4 more
LibraryThing member DMOliver
Very well written characters and plot. A believable (?) variation on The Conspiracy Theory. Great story teller.
LibraryThing member ecw0647
I have read almost everything that Kerr has written. Normally I shy away from "whatif" historical novels, preferring the reality of history to what might have happened if only if. . . . I had begun reading this book some years ago while waiting for someone in a local library and resolved to complete it eventually. I'm glad that I did.

Kerr does a great job leading the reader down all sorts of blind alleys. Tom Jefferson, a hit man who uses the names of presidents as aliases, has been approached by a man with reputed mob connections to do a feasibility study (the dreaded F word) on killing Castro. The mob is ostensibly interested in returning Havana to its former glory as a gambling Mecca when they had considerable control. Tom, snooping around, discovers his contact also has CIA connections, so he begins to become wary. He is paid $150,000 up front, a huge amount in 1959, as a down payment on the contract, after the mobsters review his plan. Then, intending to revel in their common prurient interest in Marilyn Monroe, one of the contacts promises to let Tom listen to a tape of JFK making love to Marilyn. What he hears on the tape, however, horrifies him. The mobster got the wrong tape and Tom hears his own wife, Mary, a Democratic party campaign worker, taking Kennedy every which way. Mary is found dead, an ostensible suicide, and Tom disappears from the mob's radar, taking the money with him. and the mob now fears that he will take his revenge on Kennedy. They hire Jimmy Nimmo, an ex-detective, to find Jefferson. The mob, having spent millions to assure Kennedy's victory in the election because of his vigorous anti-Castro stance, can't afford to have him killed. Nimmo's investigation reveals that Mary had been murdered very cleverly, in such a way as to make it look like suicide. The reader assumes that Tom has killed her vindictively for her fling with JFK. In the meantime, Tom has contacted an old friend at the FBI, Alex Goldman -- the FBI used Tom for its own purposes on occasion -- for information he needs to set up the hit on Kennedy. Goldman willingly cooperates. There are enough double twists and triple crosses to keep everyone satisfied except review writers who try not to reveal what happens -- you'll just have to read or listen to the book to get the scoop. I'll only disclose that Jefferson, after substantial effort and the best-laid plans, lines up a perfect shot on Kennedy's head as he visits Harvard and pulls the trigger three times.

The result will surprise you as it did me and make you wonder about the Cuban Memorandum. That should make you want to read the book. It's very plausible. Kerr, much as he did in Berlin Noir— an outstanding series of detective novels set in pre- and post-war Germany) weaves in fascinating period detail making Havana steam and Cambridge freeze.

… (more)
LibraryThing member adpaton
Philip Kerr is a favourite writer and although the Bernie Gunter series show him at his polished and witty best, the earlier ones are also worth reading, especially for anyone who enjoys historical thrillers where the sense of time and place is as engaging as the plot.

The time is 1960 and the place is a paranoid USA: Tom Jefferson is a hit man hired by the Mafia, in cahoots with figures from the FBI, to assassinate Fidel Castro for newly elected JF Kennedy, whose handling of the Cuba crisis has made him some enemies. .

As usual, Kerr populates his book with forgotten historical figures to flash out his own creations and although he never changes the historical records, he does present a new sense of what might have happened under the surface, and depict another side of past heroes we think we know. Oh and of course, there is always a bit of a twist of some sort to keep you guessing.

The Shot is an interesting book, a page-turner that reads like fact but is fiction - not Kerry at his best but very good al,l the same.… (more)
LibraryThing member coachtim30
Interesting pot boiler that is set at the start of the 1960's. Professional assassin, Tom Jefferson, is hired to take out Fidel Castro by members of the mob. Along the way, though, plans change as author Philip Kerr throws in a number of twists to take this seemingly single-minded plot to different levels.
Though, fictional, the names of the many important players in our country's history - the Kennedys, Marilyn Monroe, Sinatra, LBJ, Nixon, & Dan Rowan (really?) - from this era are all present in the story. The novel has a sufficient number of deviations to keep most thriller readers interested.… (more)
Fewer