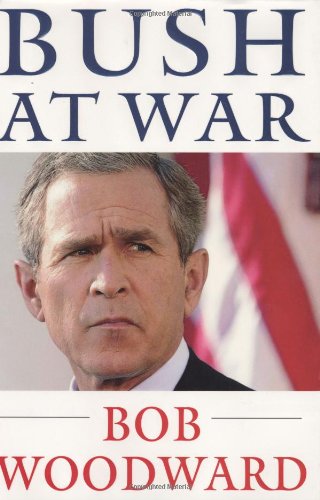 "Based on interviews with more than a hundred sources and four hours of exclusive interviews with the president, Bush at War reveals Bush's sweeping, almost grandiose, vision for remaking the world. "I'm not a textbook player, I'm a gut player," the president said." "Woodward's virtual wiretap into the White House Situation Room reveals a stunning group of an untested president and his advisers, three of whom might themselves have made it to the presidency."."Vice President Dick Cheney, taciturn but hardline, always pressing for more urgency in Afghanistan and toward Iraq. Secretary of State Colin Powell, the cautious diplomat and loyal soldier, tasked with building an international coalition in an administration prone to unilateralism. Defense Secretary Donald Rumsfeld, the brainy agitator and media star who led the military through Afghanistan and, he hopes, through Iraq. National security advisor Condoleezza Rice, the ever-present troubleshooter who surprisingly emerges as perhaps the president's most important advisor." "Bush at War includes a vivid portrait of CIA director George Tenet, ready and eager for covert action against terrorists in Afghanistan and worldwide. It follows a CIA paramilitary team leader on a covert mission inside Afghanistan to pay off assets and buy friends with millions in U.S. currency carried in giant suitcases."--BOOK JACKET.… (more)

LibraryThing member labwriter
"Objective journalism" is a non sequitor, at least in this decade of what passes for journalism. I think it's not only foolish but also dangerous to believe that any journalist writes about his or her subject in an unbiased way, yet I have read reviews of this book which praise this book for exactly that: "conscienciously fair" is one of my particular favorites.

Bob Woodward is no fan of the right, no fan of Bush or his administration, and no fan of the Iraq war. No references for Woodward's "facts" or assertions are included in the book. You make the call.… (more)
7 more
LibraryThing member gmicksmith
Although this is not Woodward's intention, I feel that he has gathered more evidence that something approaching a due process and the best of intentions existed in the decision to conduct warfare. In these post-Constitutional days, this may be the best we can hope for. As the behemoth lurches towards war on the other side of the world, Bush focused the intentions of the principals to direct their ire against American enemies. While we would have hoped for the strikeout blow that would have taken Al Qaeda out, the various American agencies, Pentagon, CIA, White House et. al. pounded back as quickly as can be expected. A less decisive President would have allowed America open to additional attacks and would have lowered the view of the U.S. in the remainder of the world by not striking back at its enemies.… (more)
LibraryThing member ubutl
Interesting insight into the first 100 days of the US response to the terrorist attacks of Sept 11, 2001. Amazing difference in the responses between the US Armed Forces and the CIA.
LibraryThing member JBD1
Woodward's inside account of the Bush White House in the moments after 9/11.
LibraryThing member chellinsky
Even with my reservations about Woodward the journalist, I found his Bush at War offered a valuable insight into how the NSC and the Bush Administration operated between September 11th and late 2002. Surprisingly, I found myself agreeing with some of the comments from principles whose policies toward Iraq I find deplorable, yet they got the immediate response correct. The means employed in Afghanistan seemed correct and proper given the reality of the country at the time (regardless of how things are continuing to deteriorate as attention continues to concentrate elsewhere).

Nonetheless, much of the time I found myself wondering why Gary's advice--CIA operative on the ground--did not travel up the chain of command? It seemed like, as many NSC committees apparently do, this NSC group spent a lot of time arguing the same points continuously rather than seeking new information from the ground proactively in an effort to move the process forward. The more I read about the working of the NSC, the more I understand where the bureaucratic political theorists come from. This is just a group of people working with varied tools and beliefs to solve complex problems--something duplicated in numerous organizations everywhere. Understanding this process and how to game it correctly seems to contain a piece of the puzzle to understanding foreign policy formation in the U.S.… (more)
LibraryThing member gopfolk
Woodward did what he does best...
...Woodward documented the days/weeks/months following the September 11th attacks and how the White House handled the situation in a very even handed and exposed way.
There was little room for question in this book as Woodward gave you every angle from the people who were there.… (more)
LibraryThing member Loptsson
An interesting look at the personalities and interactions in the highest government levels dealing with the 9/11 attack and the buildup and invasion of Afghanistan. It is interesting after living through the events to be able to take a step back from the images in ones head and look at what was going on in the government and other countries around the world.… (more)
LibraryThing member Grandeplease
Bob Woodward was given incredible access to the key players - including four hours with President Bush - and the book moves through the first 100 days after 9/11 as one would expect a news reporter to travel . . . facts, no analysis or speculation.

Seven years has not been enough time to allow history to shadow the reality - Bob Woodward revealed Richard Nixon to be a genius by comparison . . .… (more)
Fewer

State of denial by Bob Woodward
The One Percent Doctrine: Deep Inside America's Pursuit of Its Enemies Since 9/11 by Ron Suskind
Obama's wars by Bob Woodward
Shadow : five presidents and the legacy of Watergate by Bob Woodward
The Choice: How Bill Clinton Won by Bob Woodward
7 more
The secret man : the story of Watergate's Deep Throat by Bob Woodward
Dutch : a memoir of Ronald Reagan by Edmund Morris
The price of politics by Bob Woodward
See No Evil: The True Story of a Ground Soldier in the CIA's War on Terrorism by Robert Baer
The greatest story ever sold : the decline and fall of truth from 9/11 to Katrina by Frank Rich
House of Bush, house of Saud : the secret relationship between the world's two most powerful dynasties by Craig Unger
In retrospect : the tragedy and lessons of Vietnam by Robert S. McNamara
Fewer