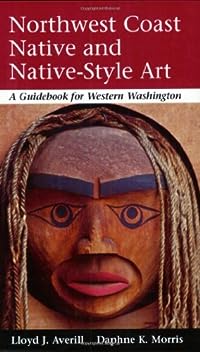 Artifacts and images associated with Northwest Coast Natives have intrigued visitors to this coastal region for centuries. Who has not been awed by the spectacle of Thunderbird, magnificent wings outstretched, atop a totem pole, or felt the power of the image of Sisiutl, the two-headed supernatural serpent? Until now, no resource guide has existed to inform visitors, as well as those who live in western Washington, about the rich heritage of Native arts, traditional and contemporary, that is a major feature of the area. Northwest Coast Native and Native-Style Art is designed to meet the need for such information. The guidebook covers sites from the Oregon line to the Canadian border and from the western slope of the Cascades to the Pacific coast. It embraces an art tradition that displays significant cultural continuity from the mouth of the Columbia River to Yakutat Bay and features art by Native and non-Native artists alike. The authors' goal was to include every publicly accessible art object located within western Washington, whether the cultural tradition it represents originates in western Washington, British Columbia, or southeastern Alaska--the region customarily defined as the Northwest Coast. In separate chapters based on five geographic zones, each accompanied by a map showing the sites to be discussed, the authors locate objects in public places; describe museum collections and tribal displays; identify retail outlets--both private galleries and museum shops--that sell Northwest Coast Native and Native-style art; provide information about recognized artists who are at work in western Washington, British Columbia, and southeastern Alaska; locate educational courses and programs designed to enhance understanding of regional arts; and list opportunities to see the art in use, for example, at powwows and in museum programs. This informative, illustrated, and easy-to-use guide will be a valuable resource for those interested in the arts and cultures of the region--from students at all levels of expertise to collectors and artists. It is a book that is long overdue and that will be a welcome addition to the library of anyone who loves the arts of the Native peoples of the Northwest Coast.… (more)