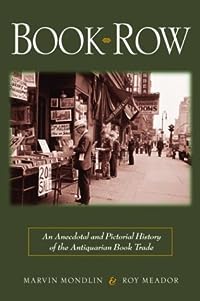 Book Row : an anecdotal and pictorial history of the antiquarian book trade

The city has eight million stories, and this one unfolds just south of 14th Street in Manhattan, mostly on the seven blocks of Fourth Avenue bracketed by Union Square and Astor Place. There, for nearly eight decades, from the 1890s to the 1960s, thrived a bibliophiles' paradise. They called it the New York Booksellers' Row, or, more commonly, Book Row. It's an American story, the story that this richly anecdotal historical memoir amiably tells: as American as the rags-to-riches tale of the Strand, which began its life as book stall on Eighth Street and today houses 2.5 million volumes in twelve miles of space. It's a story cast with colorful characters: like the horse-betting, poker-playing go-getter and book dealer George D. Smith; the irascible Russian-born book hunter Peter Stammer, the visionary Theodore C. Schulte; Lou Cohen, founder of the still-surviving Argosy Book Store; gentleman bookseller George Rubinowitz and his legendary shrewd wife Jenny. Rising rents, street crime, urban redevelopment, television-the reasons are many for the demise of Book Row, but in this volume, based on interviews with dozens upon dozens of the book people who bought, sold, and collected there, it lives again.… (more)

This is a great read for people who are overly into books. It is page after page of descriptions of bookstores formerly located in New York City's 4th Avenue book sellers' district. It is very enthusiastic, the authors are excited about every bookstore and what kinds of books they sold. It has this "... and one time, at band camp...." vibe, it's like "And then there was this bookstore, and it was really good, and then there was this other bookstore, and that was very jolly indeed, and then this other bookstore ..." Again for book lovers, it will also make you drool when the authors dig up price lists from the early 20th century. Other than that, though, if you don't have a special (and frankly, a little greedy) love of books, this doesn't have any sort of hook that will spark an interest.

Grade: B+, I feel like more could have been done to show some sort of bigger picture.

Recommended: In addition to fans of books and antique books and used book stores, I think people who are into the history of New York City would also find a lot to enjoy here.… (more)
2 more
LibraryThing member Aetatis
Good book for those of us that enjoy reading about the "good ole days" when booksellers sold new, used and rare books. Excellent for the collecting "books about books" person.
LibraryThing member Crypto-Willobie
Full of information but not very well organized. Nice bit on I R Brussel as book scout etc. (pp, 222-229). Brussel was James Branch Cabell's third bibliographer (1932) and named his son (now a successful artist) 'Cabell Brussel'. There's even a brief anecdote (p.224) about Brussel selling a protege specifically the second printing of Cabell's Jurgen, and yet Cabell's name does not appear in the index.… (more)
Fewer

Bookstore: The lLfe and Times of Jeannette Watson and Books & Co. by Lynne Tillman
A gentle madness : bibliophiles, bibliomanes, and the eternal passion for books by Nicholas A. Basbanes
Slightly Chipped: Footnotes in Booklore by Lawrence Goldstone
The yellow-lighted bookshop : a memoir, a history by Lewis Buzbee
Books : a memoir by Larry McMurtry