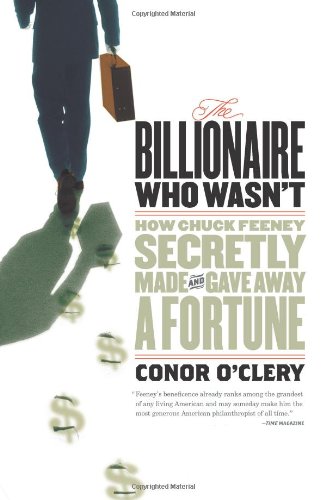 The billionaire who wasn't : how Chuck Feeney secretly made and gave away a fortune

In 1988 Forbes Magazine hailed Chuck Feeney as the twenty-third richest American alive. Born in Elizabeth, New Jersey to a blue-collar Irish-American family during the Depression, a veteran of the Korean War, he had made a fortune as co-founder of Duty Free Shoppers, the world's largest duty-free retail chain. But secretly, Feeney had already transferred all his wealth to his foundation, Atlantic Philanthropies. Only in 1997, when he sold his duty free interests, was he "outed" as one of the greatest and most mysterious American philanthropists in modern times. A frugal man who travels economy class and does not own a house or a car, Feeney then went "underground" again, until he decided in 2005 to cooperate in a biography to promote giving-while-living. Now in his mid-seventies, he is determined his foundation should spend the remaining $4 billion in his lifetime. 'The Billionaire Who Wasn't' is a tale of one of the greatest untold retail triumphs of the twentieth century, and of what happens to a unique man and his family when confronted with wealth beyond imagining.… (more)

LibraryThing member wyvernfriend
The story of Chuck Feeney, how he made his millions and gave most of it away.

It's interesting but it does show how a lot of rich people avoid the taxes the poorer have to face. I was torn between admiring him and wanting a chunk of his capital.
2 more
LibraryThing member lalalibrarian
I say it was OK only b/c I think the subject is interesting. The author can't write and the editors didn't do their job. I muddled through this for about three weeks and now I'm giving up. I wish someone else had written this book!!
LibraryThing member Peterabun
Very interesting story. I know the subject somewhat as I worked for his company for about four years. This is a really good story, poorly told. It gets pretty boring in spots. Chuck Feeney is a very unique individual. We need many more like him in the business world, instead of the Nardelli's and that ilk.
Fewer

Andrew Carnegie by David Nasaw
Titan : the life of John D. Rockefeller Sr. by Ron Chernow
Banker to the poor : micro-lending and the battle against world poverty by Muhammad Yunus
The foundation : a great American secret : how private wealth is changing the world by Joel L. Fleishman
Give smart : philanthropy that gets results by Thomas J. Tierney
4 more
Creative Capitalism: A Conversation with Bill Gates, Warren Buffett, and Other Economic Leaders by Michael Kinsley
Giving : how each of us can change the world by Bill Clinton
Lords of finance : the bankers who broke the world by Liaquat Ahamed
A giant cow-tipping by savages : the boom, bust, and boom culture of M&A by John Weir Close
Fewer