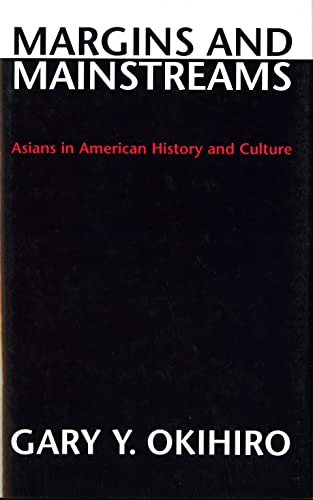 Margins and mainstreams : Asians in American history and culture

In a thoughtful and stimulating contribution to the current debate about the meaning to the larger society of multiculturalism, Gary Okihiro explores the significance of Asian Americans in American history and culture. In six provocative and engaging essays he examines the Asian American experience from the perspectives of historical consciousness, race, gender, class, and culture. While exploring anew the meanings of Asian American social history, the book argues that the core values and ideals of the nation emanate today not from the so-called mainstream but from the margins, from among Asian and African Americans, Latinos and American Indians, and women. Those groups in their struggles for equality, have helped to preserve and advance the founders? ideals and have made America a more democratic place for all.… (more)

Asian American Dreams: The Emergence of an American People by Helen Zia
Thinking Orientals: Migration, Contact, and Exoticism in Modern America by Henry Yu
Yellow: Race In America Beyond Black And White by Frank H. Wu
Strangers from a Different Shore: A History of Asian Americans by Ronald Takaki
Making waves : an anthology of writings by and about Asian American women by Asian Women United of California
10 more
Asian Americans : oral histories of first to fourth generation Americans from China, the Philippines, Japan, India, the Pacific Islands, Vietnam, and Cambodia by Joann Faung Jean Lee
The accidental Asian : notes of a native speaker by Eric Liu
Asian America : Chinese and Japanese in the United States since 1850 by Roger Daniels
Quiet Odyssey: A Pioneer Korean Woman in America by Mary Paik Lee
Storied Lives: Japanese American Students and World War II (Scott and Laurie Oki Series in Asian American Studies) by Gary Okihiro
Nisei : the quiet Americans by Bill Hosokawa
Growing up Asian American by Maria Hong
Adios to tears : the memoirs of a Japanese-Peruvian internee in U.S. concentration camps by Seiichi Higashide
Leaving Deep Water: Asian American Women at the Crossroads of Two Cultures by Claire S. Chow
The rice room : growing up Chinese-American : from number two son to rock 'n' roll by Ben Fong-Torres
Fewer