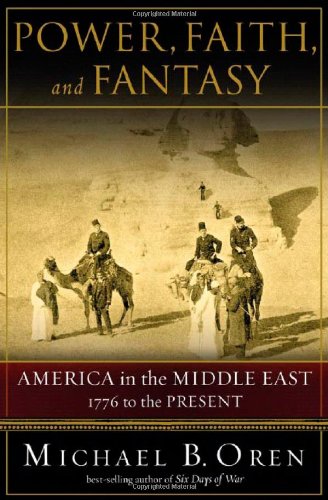 Power, faith, and fantasy : America in the Middle East, 1776 to the present

by Michael B. Oren

LibraryThing member nkrastx
Brilliant explanation of US policy in the Middle East. Contains fascinating details. You will be amazed.
10 more
LibraryThing member nbmars
This is a tremendously entertaining and well-written history of America’s relations with the Middle East from the beginning of our country to the present day. Oren organizes his study around three motifs: power (the pursuit of American interests); faith (the impact of religions on attitudes and policies); and fantasy (romantic notions of the Orient that affected government policy).

The history of religious zeal informing our policies toward the Middle East is especially intriguing. It has always been assumed that Zionism was the main driving force. Oren contends that, on the contrary, a much stronger role has been played by the concept of Restorationism, the belief held by evangelical Protestants that “by expediting the fulfillment of God’s promises to repatriate the Jews to their homeland, Christians could re-create the conditions of Jewish sovereignty that existed in Jesus’ time and so set the stage for his reappearance.” Oren tells stories about the lives of American missionaries in the Middle East and points to “the emergence of missionary dynasties capable of exerting far-reaching influence over America’s foreign relations” since leading wealthy missionary families occupied the same social circles as the country’s political elite:

"Through their personal connections with decision makers, the missionaries and their backers could place evangelism and its advocates at the head of America’s overseas priorities, particularly in the Middle East.”

The joy over this empowerment, Oren wryly notes, was not shared by the region’s rulers.

In a rather amusing subplot to the story, Oren recounts how missionary after missionary tried to get Jews to become farmers in Palestine, so as to better approximate the conditions of the land when Jesus was there. The Jews, however, could not be less interested. It was not until the increase in pogroms in Russia in the late 1800’s that the Jews began en masse to see appeal in a safe haven, and then, even farming looked good.

Some other memorable anecdotes: Sol Bloom, impresario of the Algerian Village at the Chicago Columbian Exposition in 1893, sitting by a piano and making up (but not copyrighting) "a minor-key ditty...later replayed by countless cartoon snake charmers" to accompany the gyrations of Little Egypt; Mark Twain touring Europe, surprised to find himself the victim of antisemitism when the Viennese press dubbed him "Der Jude Mark Twain" (after observing that he had a large nose); and FDR meeting Ibn Saud in the Suez Canal aboard The Quincy - Roosevelt, paralyzed, dying, ashen and weak, and Ibn Saud "scarcely less ill" having to be winched onto the Quincy because he couldn't make it up the gangplank.

Evaluation: I don’t think anyone can come away from this rather long (six-hundred pages) but rewarding history without having learned a great number of fascinating details about our history in the Middle East. Highly recommended.… (more)
LibraryThing member lketchersid
Michael Oren's POWER, FAITH and FANTASY is an immensely researched (80 pages of notes and a 50 page bibliography) and cohesively written accound of American impact in the middle east from the beginnings of America until the present. The background research and anecdotes provide a firm footing for any interested party who wants to know how the United States and the Middle East arrived to the situations they are in today.

Most notably, Oren describes the personalities of the people involved, and reminds us through evidence and quotes, that the policies of countries (whether democracy, autocracy or other) are shaped by the sentiments, education and background of their leaders. Mr. Oren runs through not only the leaders of the Middle Eastern countries in each phase, but goes in depth on the up-bringing and cultural leanings of each U.S. President (i.e., most of them) who had influence to bear on the events in the Middle East.

The book is crafted into seven sections, roughly paralleling developments in US History: independence, before the Civil War, during the Civil War, as America becomes a power, WWI, oil and WWII, and a brief skim over the years since WWII. In each section are weaved the three themes of Faith (religeous influences, including Zionist, pro-Arab, anti-Semite, etc.), Power (US ideas of democracy vs. European Imperialism, Soviet Communism, Arab self-rule) and Fantasy (films, impressions).

I enjoyed this book because Mr. Oren presented facts, not judgements, difficult to do in history as you can make the facts say what you want. But he convincingly presents as many perspecitves to each issue as he can.

His last section on the years from WWII to present was brief, but he acknowleded that it would be a fly-by because of so much material and interest that had already been written on the subject.

A long read at 600+ pages, but well worth it. I learned many new things and was reminded of some I had forgotten. Highly recommended.… (more)
LibraryThing member meppinger
Michael B. Oren narrates this winner of the NJ Council of the Humanities 2008 Book Award in an entertaining style--with concern for the details that hold the reader in place until the end. The book is the result of a tremendous amount of research through primary sources and Library of Congress records detailing the history of international relations between the United States and the Middle East, but it reads like fiction and will amaze even those who pride themselves in their knowledge of world history.… (more)
LibraryThing member gmicksmith
The threat of an armed Islamic Middle East played an important role as an impetus towards creating a strong American military force. It is not surprising that the song lyrics state: "From the halls of Montezuma, to the shores of Tripoli." Jefferson's administration had to confront the challenge to the emerging nation's weakness and inability to defend itself against foreign enemies. As stated by Michael Oren: "A threat from the Middle East had played a concrete role in creating a truly United States, a consolidated nation capable of defending not only its borders at home but its vital economic interests overseas" (pp. 31-32).… (more)
LibraryThing member chrisqhj
Very interesting and timely - especially the older material, pre-20th century. Washington's and Jefferson's writings on the Barbary States prove the old verse "there is nothing new under the sun."
LibraryThing member KApplebaum
This is one I'll be buying, because it's not a fast read. But definitely interesting.
LibraryThing member rivkat
Long book arguing that the three themes/concepts have structured American reactions to and interventions in the Middle East, a thesis broad enough that it’s pretty hard to imagine falsifying it. Basically, our policies were a lot more coherent in the eighteenth century, and it’s such a mess now that all we’ve got left is hoping that our relations magically improve.… (more)
LibraryThing member robrod1
Oren makes History enjoyable.
LibraryThing member nmele
I read this book to learn about the history of U.S. involvement in the Middle East. I did, thanks to Oren's research, narrative style and clear thesis, that the realities of power, the strength of religious forces in America and the fantasies of the area exposed by Edward Said are the key influences on the U.S. interactions with the peoples of the Middle East. Oren deftly relates the trade and other relations between the newly independent United States and the Maghrib states of Morocco, Algiers, etc. at the close of the eighteenth century. He continues with the struggle against the Barbary States in the early nineteenth century and the opening of relations with the Ottoman Empire. Oren's history filled in lots of gaps in my knowledge and clarified my understanding--he was particularly good on American Zionism and the rather strange ambivalence so many American political leaders seemed to have toward Jews. Lots of strengths to this book, and it seems to be the only comprehensive book on its subject.… (more)
LibraryThing member librisissimo
''America in the Middle East: 1776 to the Present'
Fewer

Six days of war : June 1967 and the making of the modern Middle East by Michael B. Oren
From Beirut to Jerusalem by Thomas L. Friedman
What went wrong? : Western impact and Middle Eastern response by Bernard Lewis
The Middle East: A Brief History of the Last 2,000 Years by Bernard Lewis
The missing peace : the inside story of the fight for Middle East peace by Dennis Ross
4 more
American creation : triumphs and tragedies at the founding of the republic by Joseph J. Ellis
The Israel lobby and U.S. foreign policy by John J. Mearsheimer
Dreams and shadows : the future of the Middle East by Robin B. Wright
Diplomacy by Henry Kissinger
Fewer